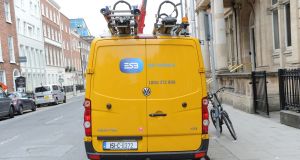 ESB pledged to pay the exchequer a dividend of €88 million from its 2019 profits.

Efforts to cut greenhouse gas emissions from its operations in the Republic are costing the ESB €60 million, according to the State-owned energy group’s results.

ESB reported on Friday that it earned pretax profits of €338 million last year and it pledged to pay an €88 million dividend to the exchequer.

The company said that it is taking a €94 million “non-cash” charge to cover various steps it is taking to reduce greenhouse gas emissions.

ESB explained that €60 million of this stems from changes it is making in the Republic. These include the planned controversial closure of Lough Ree and West Offaly peat-burning electricity plants in the midlands, and North Wall power station in Dublin.

It also covers the reorganisation of the ESB’s coal-burning power plant at Moneypoint in Co Clare, where the group is cutting back operations. It is in talks with unions about the electricity generating plant’s future.

The €60 million figure also includes a €5 million contribution to the State’s “Just Transition Fund for the Midlands” which is also due to receive cash from the Government.

Among other things, this fund is meant to pay for the cost of retraining and re-employing workers who face the loss of their jobs in harvesting peat and related work.

ESB also took a €34 million charge against shareholder loans given to Tilbury Green Power, a plant on the Thames Estuary in England that burns waste wood to generate electricity.

The Irish group is one of the venture’s main investors along with the UK Green Investment Bank.

ESB generates and sells electricity, and supplies natural gas, to homes and businesses across Ireland.

The group also runs the networks that transmit electricity from national grids to customers north and south of the Border. It invested €1.2 billion across its operations last year.

The €88 million that it intends paying the exchequer will bring to €1.2 billion the total dividends that it will have given the State over the last decade.

The company said that while the Covid-19 crisis will challenge it “both operationally and financially”, it would focus on continuing to provide safe and reliable electricity.

Electric Ireland, the business that supplies energy to customers, is urging anyone facing difficulty in paying their bill as a result of the crisis to contact the company.

Meanwhile, the Commission for the Regulation of Utilities, which oversees all energy suppliers, has banned electricity and gas companies from cutting off households for not paying their bills until April 9th.

ESB Networks and Northern Ireland Electricity Networks say that they are continuing to work to ensure that power reaches homes and businesses.

ESB Group says that its electricity generating plants are operating normally and that it has plans in place to ensure that this continues.