Going ahead with the Olympics this summer now seems unthinkable 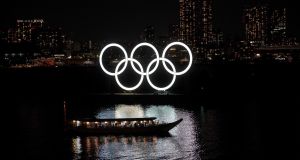 The Olympic rings a at Tokyo’s Odaiba district on Monday. Japan’s prime minister admitted a delay could be “inevitable”. Photograph: Behrouz Mehri /AFP

On Monday, Japanese prime minister Shinzo Abe conceded that the postponement of the games may be inevitable, while one member of the International Olympic Committee (IOC), Dick Pound, openly said they would be postponed, likely to 2021. The IOC’s official position, restated at the weekend, was that a final decision would come “within the next four weeks” as various consultations continue.

Both Japan and the IOC have now markedly shifted their positions from their earlier point-blank insistence that the games would go ahead, though the uncertainty is still lingering too long for many.

Australia and Canada have already taken matters into their own hands and withdrawn their athletes from both the Olympics and Paralympics. In other countries, some under lockdown, frustrated athletes are trying to train through a pandemic for an event that might not be happening and at a time when prize money and other income might have dried up.

A gold medal in logic is not required to work out that the delay in formalising a postponement is inextricably linked to the massive sums at stake. Japan has invested more than $12 billion (€11.2bn) in the games in the hope that they would pay a dividend in the form of tourism and consumer spending. Now the world’s third largest economy looks set to be mired in an Olympics-less slump.

Meanwhile, the top tier of sponsors, including Japanese giants Panasonic and Toyota, have shelled out hundreds of millions of dollars for their four-year cycle of backing the event. Their outlay partially explains the IOC’s outright refusal to contemplate scrapping the Olympics completely.

Sponsors’ interests will also be a factor in the apparent reluctance to reschedule for autumn, when conditions in Japan are more pleasant for athletes but television ratings are unlikely to be as high.

Tokyo 2021 isn’t baked in just yet, but right now it looks far more likely a prospect than the wishful thinking that is Tokyo 2020.