Viral economics: How Covid-19 might play out in Ireland

Cantillon: Impact on State a function of IT and pharma – two key economic elements 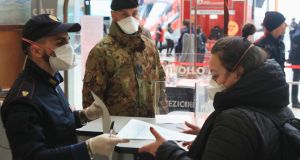 One way of assessing the likely impact of the coronavirus here is to look at the dominant industries and consider whether they amplify or absorb the incoming shock. On an export basis, the twin pillars of the Irish economy are pharma and IT, both of which are less cyclical than other industries.

Less cyclical means the demand for things like medicines and IT is less likely to rise and fall with the business cycle because they are essential, which suggests they’ll be better able to absorb shocks.

Demand for medicines and/or research to do with human health may even go up during a flu pandemic. Similarly with more people forced to work at home, demand for IT services is likely to go the same way. This is not to say the economy here won’t be affected; just that there are offsetting elements. The auto sector, which is a cyclical industry, may reduce its demand for IT, which will hit the sector here, for instance.

Other factors in our favour are the fact that we’re an island, which in theory limits or at least slows the spread, and we have a younger demographic, in other words more people in the lower-risk category.

That said, the Republic is one of the most open economies in the world and more plugged into global trade than most and therefore more vulnerable to a global downturn. An undeniable negative. And Minister for Finance Paschal Donohoe has already hinted he will downgrade his department forecasts accordingly. Other negatives include our massive aircraft leasing industry, which is very much in the Covid-19 line of fire.

The OECD is forecasting a relatively modest hit to global growth of 0.5 per cent if the virus is reasonably contained and short-lived and about 1.5 per cent in the event that the impact is longer-lasting and far-reaching.

KBC Bank economist Austin Hughes suggests these figures translate into an impact on growth here of about 0.6 per cent in the less severe scenario and between 1.5 per cent and 2 per cent in the more severe outcome.