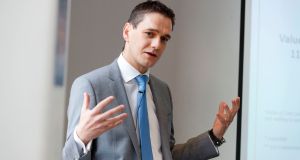 Ronan Doherty, chief executive of ElectroRoute: “I expect the next generation of wind farms in Ireland to be built at €40 per megawatt hour and below,” he says.

The Donegal-registered company, whose main office is in central Dublin, is eyeing opportunities to enter its parent’s home turf on the back of Japan’s recently deregulated power market.

“Since the Fukushima earthquake in Japan [in 2011] the authorities there have been asking themselves how they need to make changes to their energy sector – to modernise and deregulate it,” said Ronan Doherty, chief executive of ElectroRoute, in an interview with The Irish Times.

“Along with Mitsubishi, we are looking at what role we can play in that. We’ve been doing quite a bit of work in the last six to eight months on this and later this year we’ll be sending one of our business development executives over to Tokyo to continue to accelerate the plans there. Our skillsets are in trading, so it’s about bringing those and liquidity into the Japanese market.”

Set up in 2011 by Doherty and four other mainly alumni of wind farm developer Airtricity, Alex Bryson, Alan Mullane, Eamonn O’Donoghue and Bernie Fitzpatrick, ElectroRoute has grown since the Mitsubishi deal – for an undisclosed sum – from 35 to 50 staff, including two executives who’ve joined from the Japanese parent and 10 people in its back office in Letterkenny.

Historically the main part of the business has been electricity and gas trading, and it now operates across nine markets: Ireland, the UK, the Netherlands, France, Italy, Spain, Belgium, Germany and Switzerland. However, an increasing amount of its revenues have come in recent years from its client services division, where it helps renewable energy firms, often owned by financial investors rather than utility companies, in gaining access to the wholesale energy markets.

A year ago, the company had some 600 megawatts of such assets under management, equivalent to the needs of about 350,000 Irish homes. ElecroRoute is known to work with operators such as renewable power company NTR and UK-based infrastructure developer John Laing Group.

Today, with the Republic on the cusp of an all-island integrated single energy market (I-SEM) with Northern Ireland, ElectroRoute is coming close to managing 1 gigawatt of assets.

The main overhaul under the new regime, due to go live next month, is the removal of the current system where power generators receive payments for being ready to supply electricity to the grid when there are spikes in demand. This is known as a capacity payment mechanism.

Under the incoming system, known as a capacity remuneration system, energy firms have to actively bid through auctions to provide back-up supply, increasing competition between market players.

“I-SEM is an overdue and very necessary modernising step for the energy sector in Ireland,” says Doherty, who did a PhD in power systems and electricity markets at University College Dublin before joining Airticity in 2005. “We need this market if we are to have any chance of decarbonising the sector. This really marks the beginning of the end of a lot of the old dirty-style plants.”

An initial auction late last year is set to take out an estimated 10 per cent of island’s fossil fuel fleet, including AES Corporation’s Kilroot coal-fired plant in Antrim and Viridian’s two gas-fuelled plants in Huntstown in north Co Dublin. The older of ESB’s two generators in Aghada in Co Cork and its facility at the Marina in Cork city also lost out in the auction.

“I expect the next generation of wind farms in Ireland to be built at €40 per megawatt hour and below,” said Doherty, noting that this is half the price of projects under previous State support schemes. “Onshore and off-shore wind projects have made huge progress in recent years. The falling cost will change the narrative around renewable energy. It’s going to be the in-the-money primary source of energy of the future.”

Ireland installed 164 new onshore turbines last year, with wind now meeting 24 per cent of the country’s electricity demand, according to industry group WindEurope. However, the Republic is set to miss out on its EU targets to cut carbon emissions by 2020, leaving the Government exposed to annual fines of €600 million annually from 2021, according to an Oireachtas Public Accounts Committee report published last week, citing Department of Finance figures outlined last year.

“The 2030 climate and energy targets are also going to be a struggle – but the one chink of light is the falling cost of wind projects,” says Doherty. “We need to look offshore now that the value of this source of power has been established in places like Germany and the Netherlands, where projects have been awarded in recent times without subsidies.”

While Ireland only has one offshore wind farm in the 25-turbine Arklow Bank development off the coast of Co Wicklow, ESB is planning projects in the Irish Sea off the coasts of counties Louth and Wexford. Oriel Wind, the energy company backed by Glen Dimplex founder Martin Naughton, is also planning to develop a 330 megawatt scheme off the coast of Co Louth.

“We have some great offshore sites off the east coat of Ireland, which can be used to the benefit of the consumer and the environment,” said Doherty.