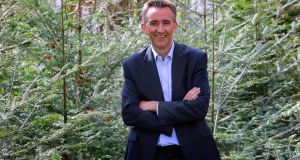 Coillte has begun the process of putting up for sale its stake in four wind farms it co-developed with ESB, SSE and Bord Na Móna.

The move comes following Coillte’s announcement last October that it would explore the potential sale as part of a strategy to develop more than 1,000MW of future renewable energy projects.

The four farms represent a net operating capacity of 104MW on an equity basis, and are the product of a €25 million investment by Coillte in the past four years. The body said it expected in the current market that it could achieve a value of more than €125 million.

Coillte would also continue to receive long term lease income from the farms, as they are located on its lands.

“Today’s announcement marks a critical milestone for Coillte as it illustrates the significant value that we have created over the last few years,” said Fergal Leamy, chief executive of Coillte. “Whether we achieve our sales price expectations or ultimately decide to retain an ongoing dividend flow from these assets, these wind farms are an impressive set of projects, delivering clean energy, demonstrable economic value and real value to the local communities. The fact that we have realised assets with an equity investment of €25 million that may trade for a value greater than €125 million illustrates the potential value we can create from every hectare of land we own to ultimately deliver enhanced value for our shareholder, the State.”

1 Brexit: System agreed for Irish goods to skip checks on UK trade
2 Why are markets booming when a crash is on the way?
3 How much do Irish people earn? And what will Covid-19 do to our wages?
4 Drumcondra credit union collapses as merger plan fails
5 Could your old car be giving away all your secrets to its new owner?
6 High Court appoints interim examiner to Compu b parent company
7 David McCullagh announced as co-host of RTÉ Six One News
8 Ireland faces 'deep downturn' this year and may not rebound until 2024 if there is a second wave
9 Former Worldspreads chief Conor Foley faces €730,000 fine
10 Second Covid-19 outbreak and no-deal Brexit an appalling vista
Real news has value SUBSCRIBE