Coillte to convert nine forests in Dublin Mountains to recreational use 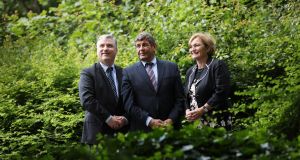 Nine commercial forests in the Dublin Mountains will be converted to primarily recreational and biodiversity use under the first project for Coillte Nature, a new not-for-profit wing of State forestry company Coillte.

Coillte Nature will also create new woodlands to promote species diversity and biodiversity carbon sequestration – a process by which carbon dioxide is removed from the atmosphere and held in solid or liquid form.

Coillte chairwoman Bernie Gray said “great strides” in its financial performance was allowing the company “to focus even more on our social dividend” through a variety of sustainability projects.

“The board of Coillte are very much bought into this, and very much committed to it,” she said.

A new director of Coillte Nature will be appointed shortly.

The company will invest €5 million in the non-commercial entity over the next three to five years and expects to secure co-funding from State, European and private sources, taking the total investment to €10 million or more.

Funding will partly come from the three Dublin local authorities and grants for native woodland conversion from the Department of Agriculture.

Gerry Murphy, managing director of Coillte Land Solutions, said Irish forests in the mid-20th century had been planted mainly for maximising timber production, but the aims of forestry programmes had evolved since then.

Some 20 per cent of the area under Coillte’s management is now designated primarily for biodiversity, while it had also increased recreational access under initiatives such as the Dublin Mountains Partnership.

The conversion to official recreational use means the nine forests will gradually move to continuous cover forestry, which will see the removal of commercial species and introduction of non-commercial native tree species in some areas. This may involve “limited” clear-felling as well as natural regeneration.

The aim is to create “a much different type of forest that people can enjoy from a landscape and aesthetic point of view”, with the projects expected to “enhance the recreational experience” for the more than 600,000 people who visit the 809 hectares (2,000 acres) of forests in the Dublin Mountains every year.

“This doesn’t happen overnight, because you don’t fight nature, you work with nature over the next 10-20 years,” Mr Murphy said.

Coillte would also like to return to commercial afforestation, in which it was active in the 1990s.

“We are working on that,” he said. “It is still very important to understand that we need to produce wood. Wood is a very biological material, it actually meets a lot of the climate change issues around carbon.”

Coillte Nature, however, will look at creating new non-commercial woodlands using hazel, birch, oak and other native species. One of the projects for which it will be responsible is the previously announced native restoration plan at Hazelwood Forest, Co Sligo, which will see trees planted on riverbanks with rich alluvial soil.

Ms Gray said Coillte had previously received approaches from private institutions interested in working on recreational forest projects. She confirmed the scheme would not result in the introduction of new visitor charges.