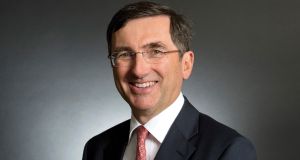 UK investment firm Brewin Dolphin’s acquisition of the Irish wealth management division of Investec drove a 7.8 per cent increase in the company’s funds under management in the final three months of 2019.

The €44 million purchase of Investec Capital & Investments (Ireland) Ltd added £2.7 billion (€3.2 billion) of assets under management and advice to the group, bringing the total to £48.5 million, Brewin Dolphin said on Wednesday as it reported a trading update for its first financial quarter, which ended in December.

“The integration of our acquisition in Ireland is progressing well and we remain confident about the long-term growth opportunities,” said chief executive David Nicol, who also announced on Wednesday that he will retire in June.

The transaction was completed in November and has left the business as the fourth-biggest wealth manager in the State, after Davy, Goodbody and Cantor Fitzgerald Ireland.

The Investec wealth arm was acquired as part of its acquisition of NCB in 2012 and has grown significantly since then. Investec’s other Irish businesses were unaffected by the sale.

Excluding the acquired Investec business, total funds at Brewin Dolphin rose by 1.8 per cent in the reporting quarter, the company said. Mr Nicol, who has led the business for eight years, will be succeeded by Robin Beer, the company’s head of intermediaries, charity, professional services and digital businesses.

“David has demonstrated great professionalism, refocused the group’s strategy, improved the quality of the organisation and built a strong team,” said group chairman Simon Miller. “Under his leadership, Brewin Dolphin has seen funds under management almost double from £26 billion to £48.5 billion.”