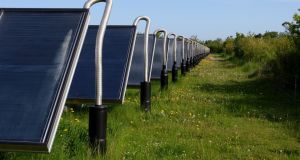 Obton and Shannon Energy intend spending €300 million over three years on building solar farms that will generate up to 500MW of electricity.

Obton and Shannon Energy said on Wednesday that they had formed a joint venture to develop solar farms, which use panels of specially manufactured cells to convert the sun’s heat to electricity, in the Republic.

The pair intend spending €300 million over three years on building solar farms that will generate up to 500 megawatts (MW) of electricity, creating about 1,000 jobs in the process.

Obton chief executive Anders Marcus said the Danish company would provide most of the cash, while Shannon Energy would provide local expertise and do much of the work on the ground.

The joint venture has earmarked sites in counties Cork, Galway, Longford, Tipperary and Westmeath where it will instal solar panels capable of producing 150MW of electricity, enough energy to cover the yearly consumption of 25,000 homes.

Mr Marcus said the business was in talks with farmers about acquiring other sites around the Republic where it could instal the remaining 350MW. Overall it will need 2,000 acres for its plan.

Government promises to launch a new scheme to provide cash support to renewable energy projects, mainly wind and solar power, helped lure Obton to the Republic, according to Mr Marcus.

He pointed out that renewable energy still needed a “bit of back up to make sense investment-wise” so proposals for the scheme were a factor in Obton’s decision to invest here.

“The way it is structured, with an auction system, is the right way to ensure that people do not pay too much for electricity,” Mr Marcus added.

All electricity users, including homes and businesses, will fund the Government’s proposed Renewable Energy Support Scheme through a public service obligation charge on their bills.

This currently stands at €2.84 a month for households and €10.35 for small businesses.

The new scheme will use an “auction” that will theoretically favour cheaper, more efficient, electricity providers.

Renewable generators will bid to provide power at particular prices. The outcome will favour the lower bids. Most European Union countries use this system.

The Government wants 70 per cent of all electricity used in the Republic to come from renewable sources by 2030, from what is expected to be close to 40 per cent this year.

“Ireland has big ambitions about what it is going to do with renewable energy, so we see a lot of potential there,” Mr Marcus explained. “It is a natural market for us and has a stable environment for investment.”

The Republic is falling short of most of its obligations to cut greenhouse gas emissions under EU and international agreements. The Government set the 2030 renewable energy target as it restated its commitment to bring the state into line with those obligations.

Electricity demand is set to surge over the coming decade as the economy grows and multinationals increasingly choose to build data centres – which consume huge amounts of energy – in the Republic.

Increased demand combined with the prospect of a new subsidy scheme is attracting overseas players such as Obton to the Irish market. Many of them form partnerships with local businesses.

Obton has invested in solar energy projects worth a total of €1.5 billion across Europe. Dublin-based Shannon Energy is involved in similar businesses in Ireland, Britain and western Europe.