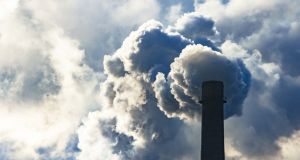 A new report backs claims that the Republic does not need to build a new plant that will allow imports of liquid natural gas (LNG) at Shannon, Mick Wallace, member of the European Parliament, said on Monday.

The news came as the International Energy Agency (IEA) called on the oil and gas industry to cut carbon dioxide emissions to shift to cleaner energy.

A report from industry analysts, Artyles, argues that the EU’s existing natural gas supply network is sufficient to supply the bloc’s needs for the fuel even in situations where important sources are cut off.

Artyles questions whether the EU should spend €29 billion on aid for the construction of new gas infrastructure.

The report includes the proposed plant at Shannon, which will take LNG from ships and convert it back to gas so it can be distributed to businesses and homes via the country’s supply network.

Mr Wallace said that the report, for the European Climate Foundation “cements how deranged the Government’s decision” was to commit the Republic to the Shannon project.

1 Bank leaked my loan request to family who tried to rip me off
2 EU and British positions harden ahead of Brexit talks
3 Ryanair and Aer Lingus monitor impact of coronavirus on travel to Italy
4 Mastercard to create 1,200 new jobs by expanding base in Dublin
5 Over $12m from sale of Walford handed over in Sean Dunne bankruptcy case
6 UK lays down red line for Brexit trade talks
7 US stocks have worst day in two years as coronavirus fears spread
8 Boris Johnson's new immigration regime will damage much more than industry
9 Some €436bn wiped off European stocks as coronavirus fears increase
10 Bank of Ireland to sell distressed mortgages and cut costs as profits fall
Real news has value SUBSCRIBE