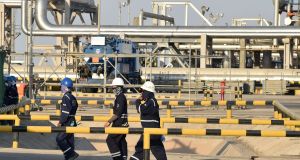 The world’s biggest initial public offering got even bigger on Sunday, as Saudi Aramco sold an additional 450 million shares to increase the proceeds from its recent stock market debut to $29.4 billion (€26.4 billion).

The company had said it might sell more stock using the so-called “greenshoe” option, which allows underwriters to increase the offering if the shares stay above the IPO price. Goldman Sachs was chosen as the bank to manage the placing of any additional shares with investors.

The IPO relied heavily on wealthy families and funds in Saudi Arabia and the Gulf after foreign investors balked at the valuation expectations of the country’s highest authorities.

Shares in Saudi Aramco slipped slightly to about SR34.75 on Sunday. While this is more than the IPO price of SR32, the stock has retreated about 8 per cent from a mid-December high which briefly valued the company at $2tn - a level long coveted by Crown Prince Mohammed bin Salman.

The company’s shares, like broader Saudi financial markets, have been rattled by heightened tensions in the Middle East after the US assassination of a top Iranian military commander.

The listing has been at the heart of economic reform plans led by Prince Mohammed, with proceeds from the IPO due to be ploughed into non-oil investments. Saudi Aramco is the world’s most profitable company by net income.

Yet the offering, which took place after a series of delays and ultimately a scaling back of its ambitions, has been like no other. Riyadh pulled out the stops to ensure its success, rather than leave it vulnerable to market forces.

For example, the kingdom issued bonus shares and made bank loans available for retail investors, while pressuring wealthy families to buy in. It also encouraged state funds to keep some money aside to support trading in the after-market.

When Prince Mohammed first disclosed intentions for the stock market flotation of Saudi Aramco, the kingdom had ambitions to raise $100bn from the sale of 5 per cent on an international stock exchange.

But a tepid response from foreign institutions forced Saudi Aramco to abandon plans to market the offering globally, restricting it to the Gulf, and to scale back the size of the stake on offer to about 1.5 per cent. Analysts said that global fund managers were unimpressed by the dividend yield on offer, among other factors.

Instead, Saudi Aramco now accounts for 9.9 per cent of the Tadawul All Share index, which represents the second-biggest weighting after Al Rajhi Bank.

The company’s market capitalisation of $1.8 6trillion makes it the world’s biggest by some distance, about $500 billion clear of Apple. – Copyright The Financial Times Limited 2020