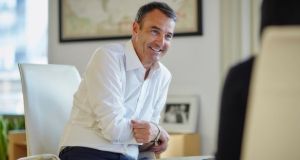 BP’s new Irish chief executive Bernard Looney has pledged to cut its greenhouse gas emissions to net zero by 2050 or sooner in one of the most ambitious climate targets made by an energy major.

Mr Looney, who took over as chief executive this month, said the company needed to “reinvent” itself in order to position itself for a global transition towards cleaner forms of energy amid a growing backlash against the fossil fuels that generate the bulk of the company’s profits.

“The world’s carbon budget is finite and running out fast; we need a rapid transition to net zero,” he added.

BP’s target is more advanced than those made by European peers Royal Dutch Shell and France’s Total, and rivals that of Spain’s Repsol.

To reach it, BP said it would overhaul its organisational structure by creating four divisions – production and operations, customers and products, gas and low carbon, and innovation and engineering.

Mr Looney’s pledges include the net zero emissions target across its operations by 2050 or sooner and a 50 per cent cut in the carbon intensity of the products BP sells over the same timeline.

However, BP did not stipulate how it planned to make rapid cuts to these greenhouse gases. The company said it will reveal more details in the coming months.

It also said that while it would take responsibility for customer emissions released from the burning of oil and gas it produced, it will not account for the larger amounts of fossil fuels it buys and trades.

Commenting on BP’s move, Greenpeace said: “This isn’t ambitious or anywhere near enough,” noting the billions of dollars BP will continue to invest in new oil and gas production.

Oil companies including BP face an uphill battle to try to placate a range of investors – those who demand that it overhauls its business and shifts towards cleaner fuels, and others who want it to preserve stellar dividends.

Mr Looney said that BP expected to invest more in low-carbon businesses “and less in oil and gas – over time”, acknowledging a need to make “wise” investments and deliver competitive returns.

In a stark remark for a fossil fuel producer, he said, “we will drive returns and cash flow, not production volumes. And with that, you can expect oil and gas production to decline gradually over time.”.

Edward Mason, head of responsible investment at the Church Commissioners for England, said: “We need oil and gas at the moment and we will need it for some time. But he is the first of the oil majors to say that production will fall.”

Mr Mason added: “There is a lack of detail at the moment, but the ambitions are groundbreaking.”

BP does invest in wind farms, solar power, biofuels and low-carbon start-ups. However, spending in these areas is a fraction of the cash invested in oil and gas.

The group has come under growing pressure – from criticism over its sponsorship of the arts to shareholders calling for greater disclosures about the company’s carbon emissions and how it plans to make its corporate strategy fit for the future.

After climate protesters forced the company to shut its London headquarters last week, Mr Looney said on Instagram: “We are listening. Both as a company – and myself as an individual . . . listening, thinking, planning, testing ideas and concepts.”