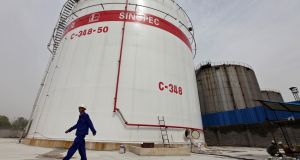 The coronavirus outbreak in China contributed to a 10 per cent fall in the Bord Gáis Energy Index in January, with the threat of the virus adding to bearish sentiment in wholesale energy markets.

The price of oil fluctuated during the month as tensions between the US and Iran spiralled following the US assassination of the high-profile Iranian commander Qassem Soleimani, leading to a spike in price to $72.

US sanctions and an easing in tensions led to oil prices retreating to pre-attack levels, meaning oil prices closed January at $58.16 a barrel, a drop of 11 per cent in euro terms and the lowest monthly close in over a year.

Oil prices have remained under pressure in the first week of February amid fears about the impact of the coronavirus.

BP has estimated that economic and travel restrictions imposed to prevent the spread of the virus could dampen oil demand by as much as 500,000 barrels.

Oil prices have fallen by more than a fifth since the outbreak of the virus in the city of Wuhan in China.

“There is still plenty of uncertainty around the global balance, with it unknown how demand will evolve in coming months as a result of the coronavirus,” ING Economics said in a note. – Additional reporting: Reuters.