Move adds to uncertainty over alumina refinery which employs 450 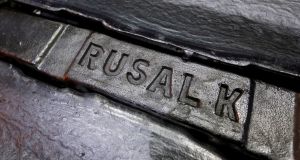 Aughinish Alumina’s main supplier of a key raw material signalled on Friday it plans to invoke a clause allowing it to pull a supply contract with the Limerick-based company, after its Russian parent Rusal was hit by US sanctions last week.

Mining giant Rio Tinto, which supplies Aughinish Alumina with bauxite, which is then turned into alumina, had been reviewing its sales to the Irish refinery as well Rusal’s supply of alumina to Rio’s aluminium smelters in France in Iceland.

“As a result of the imposition of these sanctions, Rio Tinto is in the process of declaring force majeure on certain contracts and is working with its customers to minimise any disruption in supplies,” the company said in a statement on Friday.

Force majeure is a legal clause that allows suppliers to leave contracts unfulfilled because of circumstances beyond their control.

Taoiseach Leo Varadkar on Friday held a private meeting with management of the Russian-owned alumina producing plant in Askeaton, Co Limerick, as “concern” mounted over the plant’s continued operations, and the future of its 450 employees.

Mr Varadkar said: “The Government are very, very much aware of the risks, and we’ll do everything we can to assist the company, and to ensure that it can continue to operate as normal.”

While sources said that Aughinish Alumina, Europe’s largest alumina refinery, which was acquired by Rusal in 2007, has enough bauxite to last until the end of June, Rio’s decision has added to concerns over the future of the operation on the Shannon estuary.

Calls by The Irish Times to Aughinish Alumina’s office seeking comment from management had not been returned by late Friday afternoon. Production at the plant continued throughout last week, even as Rusal and its billionaire owner Oleg Deripaska were hit by US sanctions against a number of Russian individuals and companies alleged to have links to President Vladimir Putin.

The Department of Business, Enterprise and Innovation said it was “keeping the situation under review and, together with IDA Ireland, is working closely with the company”.

It said Minister for Business Heather Humphreys had spoken to the chief executive of Aughinish Alumina “but ultimately this is a global situation that is extremely fluid and continues to develop”.

Ray Mitchell, an industrial organiser with trade union Siptu, said Aughinish Alumina was still operating at full production. He added that he was maintaining contact with the company.

Concerns over Rusal, which supplies as much as 30 per cent of the European alumina market, led to the price of the material shooting up this week by more than 25 per cent to a 12-year high. Aluminium prices have jumped 13 per cent this week, the most since the London Metal Exchange launched the current version of the contract in 1987. – Additional reporting: Bloomberg