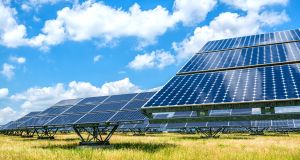 Renewable energy firm Amarenco Solar is set to invest more than €50 million in solar plants in Munster, after it received planning permission for another facility in Cork.

The 5MW Castlelyons solar farm, which was given the go-ahead by Cork County Council last week, brings to eight the number of facilities for which Amarenco has been granted permission. Each farm will see an investment of €7 million, for a total of €56 million, and will create around 40 jobs during the construction phase of each.

Once operational, the solar plants combined will provide enough energy to power 9,000 three-bedroom homes. There will also be further full-time jobs at each of the solar plants, which will be located on farming lands.

“We are ready to proceed to invest in these facilities. The Government must realise what we are proposing is not only positive for local communities, but also for Ireland, as it looks to meet its binding renewable targets for the EU,” he said. “It is too late to bridge that gap in meeting these targets, but expeditious policy setting would allow these plants to be built and new jobs to be created. Unfortunately, while we have the funds and are ready to invest, our plans are on hold until the Government commences to take solar PV seriously.”

The Cork-headquartered firm has offices in Cork, Dublin, London, Nice and Gaillac, with its largest operations in France. In February, Amarenco signed a joint venture agreement with Infracapital to to invest in greenfield renewable energy projects and assets in Ireland, the UK and France.