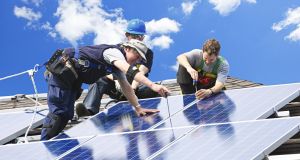 The Government faces “inevitable” European Union fines from the end of the decade for failing to meet renewable energy targets, according to the chief executive of a Dublin-based solar and biomass energy investment company.

The EU’s statistics agency, Eurostat, reported during the week that Ireland is among four of the 28 member states furthest from achieving renewable energy targets set for 2020, based on 2015 figures. Ireland and the UK are 6.8 percentage points away from meeting its 16 per cent target by the end of the decade. The Netherlands and France are faring worse, according to the data.

“If Ireland keeps going in this direction, then the country looks set to fall short of its 2020 renewable energy targets by an estimated 3-6 per cent, and will be slapped with a €200 million to €600 million [annual] fine as a result,” according to Michael Bradley, chief executive of Solar21 in Dublin, which is active in the UK and Italy.

“As renewable energy investors, we will invest where it makes most sense, but with Ireland being one of the only countries without introductory tariffs, it appears that our investment and jobs will continue to go overseas to the UK and mainland Europe, to countries that have tangible renewable policies, not just words and reports.”

Mr Bradley said that while the Government “says all the right things” about boosting the renewable energy sector, it doesn’t have much by way of a “clear strategy to roll out a genuine environmental policy on renewable fuels and reducing our greenhouse gas emissions”.

While a spokesman for the Department of Communications, Climate Action and Environment said meeting the 2020 target “will be challenging”, the State is more than half-way to meeting the objective.

Ireland is committed to achieving its 16 per cent target by 2020 through meeting 40 per cent of electricity demand, 12 per cent of heat and 10 per cent of transport from renewable sources of energy,” he said.

1 In this strangest of recessions, what happens next for Ireland?
2 Bank of Ireland sees about 2,000 staff apply for voluntary redundancy
3 Estée Lauder staff at Dublin airport plan further strike action
4 Michael O’Leary is the boss you want to lead an airline out of crisis
5 Air travel never going ‘back to way it was’
6 EY Entrepreneur of the Year: nominee profiles
7 Ireland’s Covid-19 economy in five graphs
8 Should I switch bank now with Ulster Bank at risk of closing?
9 Irish company to test vaccines on volunteers deliberately infected with Covid-19
10 Fortnite owner signs multimillion deal to buy Irish ‘kidtech’ firm
Real news has value SUBSCRIBE