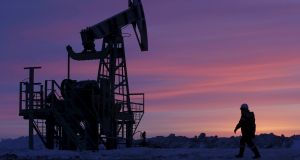 “Investors are assessing whether Opec and other big producers such as Russia are delivering on last year’s deal to cut output.” Photograph: Sergei Karpukhin/Reuters

The Bord Gáis Energy Index held firm in February over the previous month, but remains up 50 per cent year-on-year.

BGE said the lack of price movement shows that investors are “undecided over the direction that prices will take as they assess whether Opec and other big producers such as Russia are delivering on last year’s deal to cut output”.

The index’s authors also speculated that investors are becoming more concerned about the possibility of Marine Le Pen winning the French presidential election, while they have accepted a US rate rise is coming.

“There are uncertain headwinds as investors await key election results in Europe, notably in France and the Netherlands. This was partly responsible for the euro’s fall against the dollar and sterling. Looking ahead we will continue to monitor geopolitical events as well as Opec’s commitment to cut oil production,” said Darragh Crowley of BGE.

1 Irish company to test vaccines on volunteers deliberately infected with Covid-19
2 Coronavirus vaccine: 15 billion doses needed to inoculate the planet
3 Air travel never going ‘back to way it was’
4 Should I switch bank now with Ulster Bank at risk of closing?
5 Bank of Ireland sees more than 1,400 staff apply for redundancy
6 Eir takes on extra staff as ComReg chases it on complaints
7 Death of Nicholas Leonard, founder editor of Irish Times business section
8 South Dublin land at €19m has scope for up to 500 homes
9 Stripe wins more corporate customers, announces Salesforce deal
10 Why working in an office beats living at work
Real news has value SUBSCRIBE