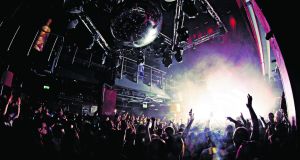 The Wright Venue in Swords, which closed in January. Photograph: David White Photography

However, the group is in expansion mode and has plans to open St Andrew’s Food Hall at Suffolk Street next year.

Accounts lodged by The Wright Bar Group Ltd show that pre-tax losses increased from €419,809 to €1.2 million, due mainly to an exceptional cost.

The group recorded the increase in losses as revenues declined marginally from €16.87 million to €16.31 million in the 12 months to the end of June last year.

The group ceased operating the Wright Venue nightclub in Swords in January 2019 and the directors’ report said they took the decision to close club after it made losses in recent years.

The principal activity of the group is the operation of licensed premises in the north and west of Dublin.

The group last year recorded an operating loss of €562,025 and an exceptional cost of €341,271 concerning the write-off of that amount owed by a connected company added to the losses.

Michael Wright is a member of the Howth Wright family, which operates a national and international fish and seafood business.