Q&A: What does Johnson’s latest proposal mean for Ireland and Brexit? 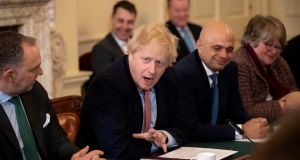 Boris Johnson announced on Tuesday that he would introduce legislation to prevent MPs extending the Brexit transition period beyond the end of 2020, UK government sources have said. Photograph: Matt Dunham/PA Wire

Boris Johnson announced on Tuesday that he would introduce legislation to prevent MPs extending the Brexit transition period beyond the end of 2020, UK government sources have said.

We take a look at what that means for Ireland, for Brexit and the UK.

What has Boris Johnson done now?

He has said that legislation to be introduced this week to pass the withdrawal agreement will include a stipulation that the UK will not seek an extension to the transition period, which is due to end on December 31st of 2020.

What does this mean?

When the UK leaves the EU – now expected to happen at the end of January – it is due to enter what is called the transition period. (In the UK it is often called the implementation period). This is a kind of standstill in which current trade rules and many other arrangements continue to apply to allow time for a new future relationship, including a new trade deal, between the two sides to be agreed. The problem is that few believe all the issues can be settled – and all the required changes implemented – by the end of next year.

So Johnson now says he will not seek more time?

Yes. Under the withdrawal agreement, an extension in the transition period can be agreed for either one or two years – to the end of 2021 or 2022. Agreement to extend must be reached by the end of June 2020.

Johnson said in the election he would not seek to extend it, but many observers felt he would still keep the option open. Now the UK government has indicated that it will amend the withdrawal legislation to outlaw any UK extension request.

Why has he done this?

It is being presented as part of the drive to “get Brexit done”. Despite his large majority, he still appears to want to keep the harder Brexit lobby on board. An extension to transition would extend the time the UK would remain under EU rules and require it to make an extra contribution to the EU’s budget. It could also delay finalising trade deals with other countries, notably the US.

The move will lead to speculation that Johnson is prepared, if necessary, for the UK to leave at the end of next year without a trade deal. This underlines earlier indications and campaign statements pointing to a harder version of Brexit and dampens any post-election speculation that his large majority would allow him to change course towards a softer version of Brexit.

Of course he could still change his mind in 2020 – even reversing course on the transition extension issue. We will just have to wait and see.

Trade experts say that the most that could be achieved would be what is called a “bare-bones” deal, involving an agreement not to impose tariffs or quotas on goods traded. But even achieving this would require agreement on fishing rights and the UK agreeing to remain aligned to EU rules. Other key issues – like trade in services, vital to the UK economy – would likely have to be dealt with at a later date. We still don’t have much indication how the UK will manage the key trade-offs here. The more the UK diverges form the EU, the more barriers will exist in trade with Europe.

If this happens – and no extension to transition is agreed – then we would have another kind of no-deal Brexit . This is different to the no deal we have been worried about over the past year which was the UK leaving without a withdrawal agreement . Leaving without a trade deal would be similar in terms of its impact on trading with the UK, involving tariffs – or import taxes – on many goods, notably food and significant bureaucracy and disruption to trade.

However leaving without a trade deal would not have the same impact on the Irish Border. The new trading regime for the North – designed to avoid Border checks and controls – is part of the withdrawal agreement, now expected to pass in the UK parliament and come into force. So Ireland would not come under pressure to erect checks at the Border.

However, challenges remain here also. The new regime due to apply to trade between Britain and Northern Ireland has been agreed in principle, but the practicalities and implementation have to be agreed by a joint EU-UK committee. And this new arrangement has to be ready to go by the start of 2021. As this involves the implementation of tariffs on some goods entering the North from Britain, a rebate mechanism and several other unique aspects, there is work to be done here which will move in parallel with the main EU-UK trade talks.

The two are linked, as well. The closer the new trading arrangements, the easier the special arrangements for the North will be to implement. Johnson’s latest indications, however, suggest that he is sticking to the harder Brexit line, making the North’s arrangements more important and trickier to work in practice.