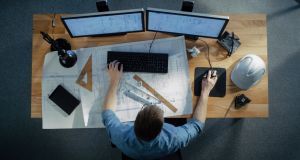 Pay to directors at one of the largest architectural practices in the country, O’Mahony Pike Architects, last year rose almost four fold to €2.47 million.

Accounts show that the hike in directors’ pay last year contributed to post tax profits decreasing by 40 per cent to €683,249.

Nine directors served with the company during 2018 and they shared remuneration of €3.02 million, made up of €2.47 million in pay and €553,448 in pension contributions.

The company’s accumulated profits totalled €4 million, while the company’s cash reserves increased from €1.2 million to €3.15 million.

Some of the company’s work includes drawing up a master plan for the Irish Glass Bottle Site in Dublin’s docklands, which hopes to house 8,000 residents.

The company carries out a substantial amount of work for one of the country’s most high profile house builders, Cairn Homes.

Numbers employed at the company last year increased from 101 to 124, made up of 103 operational staff, 14 in management and seven office staff.

Separate accounts for planning consultancy firm John Spain Associates, show it recorded a post tax profit of €285,505 in the 12 months to the end of March this year, and paid a €250,000 dividend to shareholders.