Climate regulations could provide 33 % boost to some companies, report says 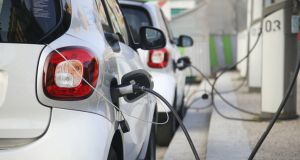 Carmakers with the swiftest transition to electric vehicles (EVs) are projected to increase in value by 108 per cent. Photograph: Getty Images

Tighter government climate regulations by 2025 could wipe up to €2 trillion off the value of companies in fossil fuel production, agriculture and car manufacturing, according to analysis issued to coincide with the COP25 climate talks.

Carbon-intensive firms are likely to lose 43 per cent of their value as a result of more robust policies designed to combat global warming, the report commissioned by the UN-backed Principles for Responsible Investment (PRI) concludes.

In contrast, the most progressive companies embracing sustainability will see an uplift of 33 per cent in their value, a finding reinforced by a separate study issued at the talks.

The PRI study suggests who will be the major winners and losers in the transition to a decarbonised world. PRI represents investors with $86 trillion of assets under management.

“As the realities of climate change catch up, social pressure mounts, and low carbon solutions get cheaper, it’s highly improbable that governments will be allowed to let the world sleep-walk into greater rises in temperature without being compelled into forceful action sooner,” its chief executive Fiona Reynolds said.

Carmakers with the swiftest transition to electric vehicles (EVs) are projected to increase in value by 108 per cent, according to the analysis by Vivid Economics. “Manufacturers slow to move to EVs will see their value fall, as governments realise that petrol and diesel models must be phased out faster for climate targets to be met,” it adds.

The study predicts the world’s largest listed coal companies could fall in value by 44 per cent, while the 10 biggest firms in oil and gas could lose 31 per cent of current value. In contrast, electric utilities with the strongest strategy for renewables could see values increase by 104 per cent, while laggards could see them fall by two-thirds.

A report from the Global Commission on the Economy and Climate in Partnership with World Resources Institute suggests “bold climate action” could deliver $26 trillion in net global economic benefits between now and 2030. It could generate over 65 million new low-carbon jobs by 2030, and avoid more than 700,000 deaths from air pollution.

Investing $1.8 trillion in five key areas to build resilience globally could generate $7.1 trillion in total net benefits between 2020 and 2030.

In cities, investments in existing low-carbon technologies and practices could cut 90 per cent of greenhouse gas emissions. These would require an investment of $1.8 trillion (2 per cent of global GDP) a year but generate annual returns worth $2.8 trillion in 2030 from energy and material cost savings alone.

Transforming food and land-use systems can unlock, it finds, significant social and economic benefits, including an estimated $4.5 trillion in new business opportunities each year by 2030, a doubling of rural income growth and over 120 million new jobs in poor rural communities, improved global food security all while freeing up 1.5 billion hectares of land by 2050.

In advice to the COP25 negotiating nations, it says “climate solutions are cheaper and more available than ever before”.

Solar and wind power are now cheaper than coal and increasingly cheaper than natural gas. EV technology “has improved so quickly that some major automakers are planning to stop making internal combustion engines”.

Knowledge about how to sequester carbon in trees and soil, as well as industrially, is advancing rapidly, it adds, while conditions to finance ambitious climate action are better than ever with real interest rates for long-term government borrowing in parts of the world at zero or even negative.

But there was resistance to climate action which is quick to latch on to the limitations of any climate policies that do not put people first, it warns.

“Social unrest in France, Chile, Ecuador and elsewhere has shown that climate action is only politically viable if it delivers clear benefits to the vast majority of people now, and it cannot leave vulnerable communities or workers behind,” it adds.