Northern administration has failed to direct resources into productive investment 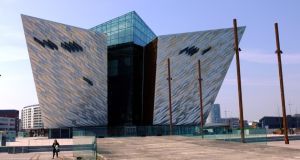 The Titanic Belfast visitor attraction. The latest available data for the North, for 2012, shows investment there reached only 10 per cent of GDP, well below Scotland’s ratio. Photograph: Bryan O’Brien

Almost 20 years ago the Belfast Agreement was signed, ending decades of conflict in Northern Ireland. While the most important benefit it promised was the chance for real political progress, it was also expected that there would be a significant peace dividend for the North.

The decline in the Northern economy after 1970 was linked to both the effects of globalisation on its industry, and to the Troubles. Once an industrial powerhouse, as traditional industry declined the North became unattractive, as a result of the Troubles, to investors providing new jobs.

The UK government pumped in increasing sums of money to prevent a complete economic collapse.

Many of the private-sector jobs lost since 1970 were replaced with public-sector jobs, financed by transfers from London. The result was that public expenditure per head in the North was 133 per cent of the UK average in 1998, well above other poor UK regions, such as Wales or Tyneside. Thus the North had far more generous provision of public resources than elsewhere in the UK.

With the ending of the Troubles, it was possible to wind back spending on security, which accounted for a smallish part of the North’s public spending. However, London has continued to maintain a high rate of non-security transfers to Northern Ireland, and today supports a level of public spending there that is 125 per cent of the UK average.

The scale of continuing transfers from London represented a major opportunity for the new devolved administration when it took office. With the end of the Troubles facilitating the possibility of real growth in private-sector employment, much of this funding could have been used to rapidly develop the Northern economy, rendering it less dependent on London.

Instead, over the 20 years since the Belfast Agreement, the transfers have been used to fund continuing very high levels of public services.

Controlling for price differences, the North spends more than 40 per cent more per head on public services such as health, education and security than we do in the Republic, in spite of the fact that their output per head is 15 per cent less than that in the Republic.

This is made possible because 30 per cent of income in Northern Ireland comes as a transfer from London.

The Northern administration has failed to direct resources into productive investment, including infrastructure.

An economy can sustain its growth only if it invests. In normal economies which are growing, investment takes up about 20 per cent of national income (when the Republic’s investment rate peaked at more than 30 per cent it was, however, unsustainable). The latest available data for the North, for 2012, shows investment there reached only 10 per cent of GDP, well below Scotland’s ratio.

That level of investment in the North was hardly sufficient to maintain existing infrastructure, much less develop a vibrant economy.

The low investment rate in the North has been translated into a steady fall in labour productivity, measured as output per person employed, relative to the UK average. Between 2000 and 2014, the North’s productivity fell from 93 per cent of the UK average to 80 per cent.

What makes that even worse is that the UK’s productivity has itself been declining over the last decade relative to European Union partners. So the North has been experiencing a falling share of a falling index.

The case of eastern Germany provides a striking contrast, where stronger investment performance has supported achievement of greater regional convergence.

While the former East Germany is still much poorer than the German average, the investment boost it received has seen output per head grow steadily relative to the rest of Germany. Its productivity has risen from 73 per cent of the German average in 2000 to almost 80 per cent by 2014.

The failure to develop a vibrant Northern Ireland economy, and particularly a strongly-performing private sector, is a major concern. The looming spectre of Brexit is a danger point, with the North more vulnerable than other UK regions to its adverse effects.

If London continues to supply generous transfers, that could offer the North some insulation. However, a UK economy that is hurting from Brexit, along with jealous looks from other struggling UK regions at the scale of transfers to the North, will put this lifeline at risk in the future.