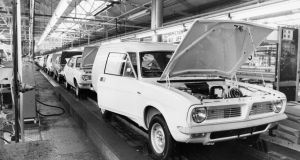 Prior to Ireland’s EU entry, most cars were imported into the State like a dismantled jigsaw puzzle – they had been assembled in the UK, then taken to pieces and sent to Ireland to be reassembled. Photograph: Evening Standard/Getty Images

In many developed countries globalisation has become a bad word, the scapegoat for loss of manufacturing jobs, even though technical change has accounted for much of the lost employment.

In recent times, some of those who feel they have lost out from globalisation have found a political voice through Donald Trump in the United States, the win for Brexit in the UK, and growing support for anti-EU, largely right-wing, political parties in some European Union states.

By contrast, in Ireland, there is widespread recognition of the benefits for the community as a whole from Ireland’s central place in world trade. While the transition to a global economy in Ireland has left behind some losers, the way the transition has taken place, especially its timing, has made it much less painful than in many other developed economies.

For Ireland, the first major shock involving significant job losses occurred in the 1970s on joining the EU. Many of the jobs in Irish manufacturing had grown up since the 1930s behind a high protective wall of tariffs, which disappeared on joining the EU.

By the end of the 1970s, most of the jobs which depended on protectionism had disappeared, leaving significant numbers on the dole.

For example, prior to EU entry, most cars were imported into Ireland like a dismantled jigsaw puzzle – they had been assembled in the UK, then taken to pieces and sent to Ireland to be reassembled. Many people were employed here in this incredibly inefficient process, jobs which had all disappeared by 1980.

However, while there were, in the short term, some losers from EU entry, these losses were more than offset by gains, in particular for the farming community. Still, the combination of job losses in manufacturing and a major fiscal crisis generated political turmoil in the 1980s.

Because the job losses from globalisation in Ireland occurred during the boom in the early 2000s, they went almost unnoticed

A second wave of trade liberalisation occurred in Ireland with the completion of the EU single market in 1993. In that case, however, it was nearly all gains and very few losses. The opening up of public contracts across the EU, and the freedom to sell services across borders, gave a very big boost to the Irish economy in the 1990s.

Previously the telecommunications sector in each large EU country bought its equipment from national suppliers, and preference was also given to pharmaceuticals and medical devices manufactured nationally. This had particularly favoured national suppliers in large countries such as the UK, France and Germany.

For Ireland, the single market allowed the development of the IT and pharma sector. The result was a rapid rise in manufacturing-sector employment in the 1990s as new businesses opened and older businesses prospered, creating a very successful and diversified manufacturing sector by the end of the 1990s.

But, from 2000 onwards, even as the economy continued to boom, a transition took place among exporting firms in manufacturing. As wage rates rose and new job opportunities opened up, firms in more traditional areas of manufacturing came under pressure. Gradually their workers left for more profitable jobs elsewhere, and the firms closed in sectors such as clothing and motor parts.

These closures were not accompanied by industrial action: rather, both workers and trade unions recognised that the firms in traditional areas could not pay more, and workers were better moving to where pay was better.

As a result, employment in traditional sectors fell by 25 per cent between 2000 and the height of the boom in 2007. These job losses arising from globalisation made no headlines as the employees moving jobs were immediately better off. It was an almost ideal way to transition to a global economy.

In many other countries, the problem is that there has been a long hiatus before those losing their jobs in old sectors find alternative employment. Where the recently unemployed, such as steel workers, have sector-specific skills, they may find it exceptionally difficult to transition to new growing sectors where there are job opportunities.

Because the job losses from globalisation in Ireland occurred during the boom in the early 2000s, they went almost unnoticed. However, when the recession hit, we would have benefited if more of these jobs had survived, offering an employment cushion.

In the 1970s, our manufacturing job losses affected mainly unskilled workers and those with sector-specific skills, who were less readily re-employed in growing sectors. In contrast, in the 2000s, the transition of workers from declining sectors to growth areas of the economy was facilitated by higher levels of education and adaptability, allowing them to find alternative career paths in new employment areas.