Why Trump is making some business leaders nervous 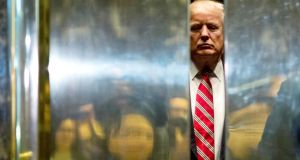 With Donald Trump’s inauguration as the 45th president of the United States just two days away, there must be quite a few business leaders who are nervously wondering what retribution might be coming their way following their criticisms of the property magnate before polling day, or the support given to his rival Hillary Clinton.

Among them might be Tony Smurfit, the head of Irish listed packaging group Smurfit Kappa and son of Michael Smurfit. On November 2nd, just days before the presidential poll, my colleague Joe Brennan reported on how Smurfit had signalled that the group’s appetite for deals in the US would wane in the event of Trump winning the election.

“I think it’s just still unbelievable we could be contemplating a Donald Trump victory,” he told The Irish Times after the company posted its third-quarter results. “I think the world will take a more cautious approach [on US investments].”

While he said that “America still remains a major opportunity” for Smurfit Kappa, the prospect of doing deals – with Trump in charge of the White House – would be affected, given the candidate’s protectionist stance on international trade.

“Assuming Hillary [Clinton] wins, it won’t change anything,” he said, referring to the company’s interest in US acquisitions.

To be fair, many Irish business leaders would have shared Smurfit’s thoughts and concerns, though perhaps not so publicly. Luckily for Smurfit, he is probably well down the list of global business leaders that Trump might want to target.

Tump has had the hump with US department store retailer Macy’s since 2015 after it dumped his branded merchandise in the wake of him calling immigrants from Mexico and other countries rapists and criminals.

On January 7th 2016 Trump tweeted: “@Macys was one of the worst performing stocks on the S&P last year, plunging 46 per cent. Very disloyal company. Another win for Trump! Boycott.”

In a tweet the following month, he called for a boycott of Apple’s products for refusing to give information to US authorities regarding Islamic terrorists.

PepsiCo, Dell, Dreamworks and Netflix were others placed on a boycott list by Trump supporters.

A number of global business leaders were critical of Trump and supported Clinton’s campaign, including Netflix’s chief executive and co-founder Reed Hastings. “Trump would destroy much of what is great about America,” he said.

“We believe in an inclusive country that fosters opportunity, creativity and a level playing field. Donald Trump does not,” the letter stated. “He campaigns on anger, bigotry, fear of new ideas and new people, and a fundamental belief that America is weak and in decline.

“We have listened to Donald Trump over the past year and we have concluded: Trump would be a disaster for innovation. His vision stands against the open exchange of ideas, free movement of people, and productive engagement with the outside world that is critical to our economy – and that provide the foundation for innovation and growth.”

Among those who signed the letter were Steve Wozniak, co-founder of Apple, Jeremy Stoppelman, the chief executive of Yelp, Pierre Omidyar, founder of eBay, and Dustin Moskovitz, co-founder of Facebook.

In a rant on Twitter in December, Trump warned that any business that left the US, fired employees or built a factory in another country would be hit with a border tax of 35 per cent when they seek to sell their products into the US.

“Please be forewarned prior to making a very expensive mistake! The United States is open for business,” he said, ignoring the obvious contradiction.

In a tweet on January 5th, Trump had a cut at Japanese car maker Toyota for announcing a new plant in Mexico to build Corollas. “No Way! Build plant in US or pay big border tax.”

And on and on it goes.

Trump’s clear message to corporate America is that he’s not to be ignored or crossed. Tony Smurfit might want to revise his strategy.

8 Garmin Enduro: Built to last and crammed with features