A report released by global charity Oxfam claims that eight billionaires own the same wealth as the poorest half of the planet. Video: OXFAM 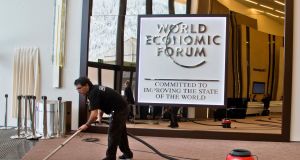 A man cleans a carpet ahead of the World Economic Forum in Davos, Switzerland. Photograph: Michel Euler/AP

The gap between rich and poor is becoming increasingly large, with just eight individuals owning the same wealth as 3.6 billion of the world’s poorest people, according to new research.

A report from Oxfam, launched on the eve of the World Economic Forum in Davos, found that the poorest half of the world has less wealth than previously thought, due to new data emanating from China and India. This means that the eight richest men in the world are worth the same as the poorest half of the world’s population, according to wealth distribution data provided by Credit Suisse.

“It is obscene for so much wealth to be held in the hands of just eight men . . . particularly when one in nine people in the world go to bed hungry every night,” said Oxfam Ireland chief executive Jim Clarke. “A fundamental change in the way we manage our economies is required so they benefit everyone, not just a fortunate few. We need a global economy for the 99 per cent, not just the 1 per cent.”

More than 3,000 participants, including Taoiseach Enda Kenny, will descend on the snowy peaks of Davos, Switzerland, this week for the 47th World Economic Forum.

While the annual gathering has long been seen as a playground for the rich and powerful, the event this year is taking place against a background of resurgent populism and increasing public opposition to globalisation. This mood has been manifested in the election success of Donald Trump and the British vote to leave the European Union. 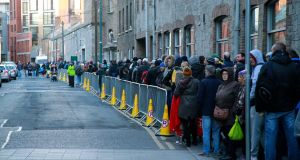 Although the US president-elect will not be attending the event, his inauguration as president of the US on Friday is expected to overshadow the summit. A number of sessions during the week are devoted to globalisation and the challenges posed by growing inequality and the question of wealth distribution. The theme of this year’s forum is “Responsive and Responsible Leadership”, a barely veiled acknowledgement of anxieties about the incoming regime in Washington and the series of elections scheduled to take place across Europe in 2017.

Among the most high-profile participants this year is Chinese premier Xi Jinping, who will deliver a keynote address on Tuesday. His presence marks the first visit to Davos by a Chinese leader.

British prime minister Theresa May will deliver a special address on Thursday morning, two days after she is expected to unveil details of her government’s vision for Brexit in a major speech.

British chancellor of the exchequer Philip Hammond will be in Davos on Friday, when he is expected to do a series of interviews and participate in a session titled “Britain and the EU: The Way Forward” with the former Italian prime minister and EU commissioner Mario Monti and others.

While more than 50 heads of state and government will travel to the exclusive Swiss ski resort, some of the world’s most senior banking and corporate executives will also attend the five-day event.

Among the economic heavy-hitters in attendance will be Jim Yong Kim, president of the World Bank, and IMF managing director Christine Lagarde, as well as senior executives from the world’s biggest banks, such as UBS, Goldman Sachs and Deutschebank.

Senior officials from Trump’s transition team will attend the event, however, and are expected to hold a series of bilateral meetings with senior political leaders, including possibly Xi Jinping, on the fringes of the event.

Outgoing US vice-president Joe Biden will address the summit on Wednesday, while US Secretary of State John Kerry will also attend the forum, undoubtedly one of his final official engagements of the Obama presidency.