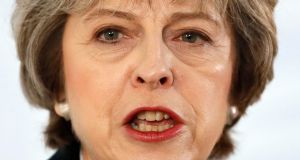 Prime Minister Theresa May speaking at Lancaster House in London, where she outlined her plans for Brexit. Phoograph: Kirsty Wigglesworth/PA Wire

What are the key points of Theresa May’s speech?

The British prime minister has set out her view that when Britain leaves the EU, it will cut much of its existing economic, political and legal links. In the jargon, this is called a “hard Brexit”. However, all this remains to be negotiated, and there is a still a lot of vital detail to be worked out.

In terms of specifics, a notable point of the speech was May’s commitment to try to retain the common travel area between Britain and Ireland, and her desire to avoid a sudden disruptive British exit from the EU.

For Ireland: Our interests would have been better served by a softer Brexit, as it would help protect trade and make it easier to negotiate the future of freedom to move and work between Ireland and the UK. The harder the Brexit, the bigger the risks for Ireland.

The specific reference by May to maintaining the common travel area and free movement across the Border is a positive, though this all still has to be negotiated.

What does leaving the single market mean?

The single market is a central pillar of the EU, underpinning the free movement of goods, services, capital and people. Theresa May was clear that Britain will leave the single market so that it can implement new rules on immigration from other EU countries. It also wants to escape the jurisdiction of the European courts.

The price will be that British businesses will lose automatic free access to European markets – a big issue for, for example, London-based financial services companies. And a new system of regulation will be needed for the many British industries currently overseen by EU rules and bodies.

For Ireland: Britain’s exit from the single market raises questions about the future of the common travel area between Ireland and Britain, and the ability of Irish workers to work freely in Britain and vice versa. So it is welcome that maintaining this was outlined as a specific British goal.The Irish Government will seek to have current practices continue, as far is possible. Free movement across the Irish Border will obviously be a key issue.

The prime minister committed to safeguarding the position of EU nationals already working in the UK, welcome news for the tens of thousands of Irish nationals working there.

Britain leaving the single market has big implications for Irish businesses, raising questions about future trading relationships, business supply chains and access to the UK market. May said she wants to maintain as much free trade as possible post-Brexit, but tough talks lie ahead.

On the plus side, Britain leaving the single market will encourage UK financial institutions to seek bases within the EU – and Dublin should benefit.

What about the customs union?

The customs union is an agreement that goods can circulate within the EU without quotas or tariffs. Part of it involves all EU countries imposing the same tariffs and rules on goods coming from outsider the EU. May has said that Britain will want to retain some aspects of customs union membership, though said she has no fixed view on how this will happen.

She made clear that the reason why Britain wants to leave the customs union, at least in part, is for the freedom to negotiate its own trade deals with non-EU countries. However, will the rest of Europe allow Britain this freedom while still letting it trade without tariffs and other barriers across the EU? This will be a key negotiating issue.

If Britain is pushed out of the customs union completely, it would mean it would have to strike new deals with all non-EU countries, as well as the bloc itself, or face imposing tariffs (special import taxes) set down by WTO rules, and seeing these tariffs imposed on British exporters abroad. Leaving the customs union would also oblige Britain to set up a whole new range of customs controls across its borders and impose significant new bureaucracy on British business.

May is clearly trying to avoid some of these complications and retain some advantages of free trade, but whether she can succeed in negotiations remains open to question.

For Ireland: If Britain leaves the customs union, then some kind of control on the movement of goods across the Border look inevitable. The Government here will hope that this can be done largely using technology, as opposed to queues of lorries.

Irish exporters to Britain could also face new customs checks and bureaucracy. Britain leaving the union also opens up the likelihood of new tariffs on Irish products sold in the UK, and British products sold here. The level of tariffs and how – and from when – they will apply will all have to be negotiated. There is huge potential here for complications, delays and difficulties.

The more the prime minister succeeds in retaining free trade with the EU in her negotiations – which she has said is a key goal – the better for Ireland and the less these problems become.

What is the transitional deal, and what does it involve?

The negotiations on the terms on which Britain will leave the EU are due to be completed in two years, so it could exit around April 2019. But what if, as seems likely, a deal has not been finalised by then on the new trading relationship that will apply between the UK and Europe in future? Or, as May indicated, a deal has been more or less sorted, but time is needed to implement it.

A transitional deal – or an implementation phase, as May refers to it – would govern what rules would apply after Britain leaves but before a new trade deal is struck. If there is no such deal, Britain could crash out of the EU and new tariffs would have to be applied immediately at levels set down by the World Trade Organisation, while British businesses could face disruptive uncertainty.

For Ireland: It is important for Ireland that Britain’s exit is as smooth as possible. If Britain left without a transitional deal, then Irish exporters would, for example, face immediate tariffs selling to the UK – and the price of imports from Britain would also rise, as tariffs were imposed here on British goods.

There could also be significant uncertainties about the rules governing trade in different sector in the event of an acrimonious split. It would be in Ireland’s interests to have as clear a transitional arrangement as possible – and one that involves as little as possible change from current practices