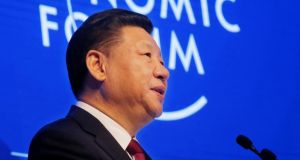 Chinese president Xi Jinping told a packed audience at the World Economic Forum in Davos “the global economy is a big ocean you cannot escape from”. Photograph: AP Photo/Michel Euler

Chinese president Xi Jinping has launched a strident defence of globalisation in the first speech by a Chinese leader at the World Economic Forum in Davos.

Addressing a packed audience at Davos, the Chinese leader said globalisation was not to blame for the world’s difficulties, despite the fact that it had become a “Pandora’s box” in the eyes of many.

“Some blame economic globalisation for the chaos in our world,” he said, but in fact “excessive chase of profit by financial capital and grave failure of financial regulation” had given rise to the financial crisis.

He said that China had once had doubts about globalisation and about the merits of joining the World Trade Organisation, but it had chosen to swim in the “vast ocean of the global economy.” “It has proved to be the right strategic choice. Whether you like it or not the global economy is a big ocean you cannot escape from.”

Mr Xi’s speech had been widely anticipated, particularly in light of threats by the incoming United States administration to impose curbs on Chinese imports.

While the Chinese president did not refer to the US directly, during his speech Mr Xi called on all countries to “keep their doors open”.

He said China expected to import $8 trillion worth of US goods and attract $600 billion of inward investment from the US over the next five years.

“China will keep its door wide open and not close it.”

Underlining the economic upsides of free markets, Mr Xi said pursuing protectionism was “like locking oneself in a dark room. Wind and rain may be kept outside, but so is light and air.”

“No one will emerge as a winner in a trade war,” he added.

Earlier,a senior advisor to US president-elect Donald Trump appeared to reiterate that the incoming administration in Washington would consider imposing trade tariffs on China.

In an interview with the BBC, Anthony Scaramucci, a senior Trump advisor, suggested the US would have the upper hand in any trade war with China.

“The relationship is asymmetrical – it’s more favourable to China than us,” he said.

“What are they gonna do? They gonna move against our move for fairness? That’s gonna cost them more, way more than it is ever going to cost us, and I think they know that.”

While Mr Trump is not attending the five-day forum in Davos, his imminent inauguration is looming over this year’s World Economic Forum.

During his speech Mr Xi also touched on the sensitive issue of currency exchange, pledging not to devalue the renminbi or launch a currency war.

But he also struck a warning note about the state of the global economy.

Noting that growth was at its slowest pace in seven years, he said the global economy was lacking a driving force and needed to find new growth drivers, based around innovation.

As the world’s largest developing country, with more than 1.3 billion people, China still had “enormous space for growth and development,” he said. “We are firm in our resolve to forge ahead. China will stay ahead of the curve and make co-ordinated efforts to maintain steady growth and improve people’s living standards.”