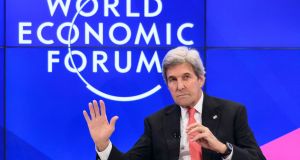 US secretary of state John Kerry has defended the outgoing US administration’s economic record and foreign policy achievements, as he urged the United States to build on the achievements of the last eight years.

Speaking at one of his final engagements as secretary of state, Mr Kerry said the US economy had rebounded since the global financial crisis of 2008.

Recalling how the then treasury secretary had come up to him “pale and quaking” in the autumn of 2008 as the financial crisis took hold, he said: “Today we are the strongest economy in the world by far. The dollar is the strongest it has been in years.”

Speaking at the World Economic Forum in Davos, Switzerland, Mr Kerry said he was “proud” of the Obama administration’s foreign policy achievements which prioritised “engagement and negotiation ahead of the rush to war”.

Amid expectations that incoming US president Donald Trump could seek to unravel the landmark Iran nuclear deal negotiated by Mr Kerry and others, the outgoing secretary of state highlighted the agreement as one of the cornerstones of the Obama years.

“I believe that this is an agreement that can endure and there is no question in mind that the world and the region is safer because a country with which we still have differences . . . is not hurtling towards a nuclear weapon.”

He questioned whether the US would move to undo the deal, noting that Russia, China and the European countries which were party to the agreement, would almost certainly choose to maintain it, leaving the US “the odd person out”.

He also cited the close co-operation between the US and Europe over the Ukraine crisis, arguing that sanctions against Russia had “worked”, though the US administration’s policy on Syria was not mentioned.

“The West bank is slowly and steadily being eaten up; municipal boundaries of settlements are being expanded beyond the boundaries themselves . . . most of the West bank has been reserved for the exclusive use of Israel. That’s not a Palestinian state.”

Earlier in the day, Anthony Scaramucci, a senior adviser to president-elect Trump had thrown some light on the policies of the incoming US administration. While the former Goldman Sachs banker played down threats of a trade war with China, insisting the new US administration wanted a “very strong bilateral relationship” between the US and China, he said it did want “free and fair trade”.

He said that America’s trade relationship with China had been “asymmetrical” for some time, and this needed to be addressed.

“All we’re asking is to create more symmetry in these trade agreements,” he said, noting that the American manufacturing sector had been “hollowed out” by various trade deals struck by the US and other countries in the past.

Amid growing international concern over Mr Trump’s description of Nato as “obsolete”, Mr Scaramucci said the president-elect simply meant that “we need to look at a new way of how Nato is architected”, noting that the threat of communism that lay behind Nato’s formation had now receded.

The imminent Trump presidency is looming over this year’s World Economic Forum which coincides with the inauguration of the new president on Friday.

Tuesday’s session saw the first ever address by a Chinese leader to the global forum, with Xi Jinping outlining a strong defence of globalisation and free trade and warning about the perils of protectionism.

In a barely-veiled reference to the incoming regime in Washington, Mr Xi warned said that “no one wins” in a trade war, as he espoused the benefits of open borders, arguing that there was “no point” in blaming globalisation for the world’s problems.