CSO revises 2017 growth rate down to 7.2 per cent but cautions on GDP figures 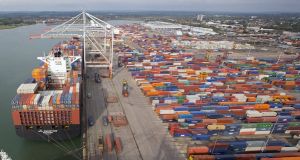 The value of the Irish economy hit a record €294 billion last year in terms of gross domestic product (GDP), the standard measure of economic activity, even as headline growth was revised down to 7.2 per cent from a previous estimate of 7.8 per cent.

The latest quarterly national accounts from the Central Statistics Office (CSO) show the Republic was once again the fastest-growing economy in Europe in 2017.

The headline GDP rate here was more than three times the euro-area average and stronger even than the 6.7 per cent recorded by China.

However, the relevance of using traditional measures of national income to assess the Irish economy has been repeatedly called into question since the 2015 GDP figure was revised up to 26 per cent.

In its latest accounts, the CSO suggested that GDP probably exaggerated the true level of economic activity here by up to 40 per cent last year.

Using its bespoke measure of national income – modified gross national income (GNI*), which weeds out the statistical noise associated with multinationals – the value of the Irish economy was put at €181 billion.

The more modest total may explain why households here have not felt the full benefit of the Republic’s stellar growth rates to date.

Equally, the State’s debt metrics are flattered by GDP. In 2017 the Government debt-to-GDP ratio stood at 68 per cent, while the debt-to-GNI* ratio was 111 per cent, underscoring the Republic’s more precarious debt position.

Across the larger sectors of the economy, information and communication, which includes the big global IT companies, grew by nearly 14 per cent in the first quarter, while industry decreased by 9.7 per cent in volume terms. Personal consumption, a key measure of economic health, also fell by 0.3 per cent.

The CSO noted that modified domestic demand – another measure used to remove the distorting effects of multinationals – grew by 2.8 per cent during the quarter, perhaps better reflecting the overall trajectory of the economy.

The data showed that exports decreased by 5.8 per cent in the first quarter of 2018 when compared with the fourth quarter of 2017, while imports declined by 2.5 per cent.

“These GDP figures, while compiled according to best international practice, are becoming less and less representative of the economic environment facing most Irish based businesses and households,” KBC Bank economist Austin Hughes said. “It is now questionable whether this measure helps or hinders our understanding of what is going on in the Irish economy at present,” he added.

EY Ireland chief economist Neil Gibson said the fall in GDP in the first quarter should not trigger any concern over Irish economic performance given the volatility in the measure.