‘Rainy day’ money should be redirected into education – Ibec 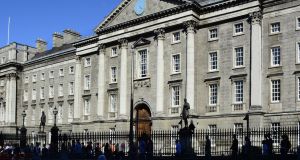 Ibec has criticised the Government’s plan to establish a so-called “rainy day fund”, suggesting the pot of money to be set aside is too small to act as a buffer against future economic shocks.

In a prebudget submission, the employers’ group said the money should be used instead to address the funding crisis in higher education, which it described as one of the biggest issues facing the State.

The reduction in public expenditure on education over the past decade combined with rising student numbers has seen Ireland fall behind its competitors in the international rankings, it said.

Trinity College Dublin lost its status as Ireland’s only top-100 university in the latest QS World University Rankings, published earlier this year, while six out of eight top-ranked Irish colleges fell in the rankings.

“We have a real crisis in terms of funding for higher education and we have no plan to fix it,” Ibec’s director of policy, Fergal O’Brien, said.

“The exchequer contribution per student has collapsed over the last number of years and we’re falling down the international rankings...we really need to wake up to the fact that our reputation is being severely damaged,” he said.

Mr O’Brien said the business lobby agreed with the idea of ringfencing money in the upcoming budget but favoured using it for a specific purpose that would give a strong return to the State.

“And that purpose should be funding higher education,” he said. “We don’t think the rainy-day fund as currently structured is the right way to go,” he said.

Under the Government’s plan, the fund will be initiated next year with €1.5 billion from the State’s sovereign wealth fund, the Ireland Strategic Investment Fund, and an additional €500 million from budget resources.

“The scale is going to be so small – by the time you get out to a downturn in the cycle, it’s just not going to have an impact,” Mr O’Brien said.

In its submission, Ibec said the Government was right to be cautious and prudent around budgetary spending given the strength of the economy and the potential for overheating.

However, it said a step change was needed when it came to fostering indigenous business, which it claimed was not adequately supported by the State.

The lobby group called for several new measures to support home-grown enterprises, including a new 12.5 per cent capital gains tax for entrepreneurs. It also wants to see a better share option scheme for employees. The organisation claimed the key employee engagement programme (Keep) brought in last year by the Government was “too restrictive”.

The lack of incentives here, combined with Brexit, has prompted some SMEs to incorporate in the UK, it said. “If their main market focus is the UK they’re almost better off having their businesses in the UK,” Mr O’Brien said.

The lobby group believes tax reform in the US is likely to have a significant impact on foreign direct investment here in the coming years.

“Ibec believes it is vital that Budget 2019 provides certainty by recommitting to the FDI-driven growth model, the 12.5 per cent corporate tax rate and the importance of the R&D tax credit,” it said.

Separately the Small Firms Association (SFA) has warned the Government not to fuel business costs by increasing the minimum wage. The warning comes in advance of the Low Pay Commission delivering its recommendations on the minimum statutory wage to Government this week.

“Costs for small businesses are already shooting up. Government should not add fuel to the fire by imposing a further increase in the National Minimum Wage, ” said SFA director Sven Spollen-Behrens.