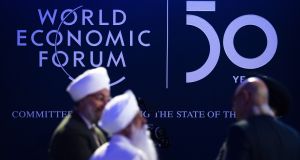 It hasn’t been a good week for bats, with the flying mammals being pointed to by some as a potential source of a deadly coronavirus sweeping China that’s already killed 17 people and infected more than 500.

But for University College Dublin professor, Emma Teeling, a bat expert and newbie to the weird and wonderful world that is the World Economic Forum (WEF) conference in Davos, these creatures offer the greatest hope to solving what she calls the world’s second-biggest issue, after the climate crisis: how to slow down the ageing process in humans.

While WEF officials wouldn’t allow reporters into Teeling’s presentation on Wednesday, she was more than happy to talk to The Irish Times afterwards about her work, funded by the European Research Council and the Irish Research Council.

“We are all living longer. It’s estimated there is going to be a 340 per cent increase in people over the age of 80 globally in the next 30 years, so we’ve got to find ways to extend the health span of our ageing future populations,” she said.

Now for the science bit. It mainly appears to be the structures at the end of chromosomes in their cells – called telomeres – that protect bats’ DNA as they replicate. Most mammals’ telomeres shorten as they age, driving the ageing process. But for the longest-living bats – who can be up to 37 years-old, the human equivalent of 234, without obvious signs of ageing – these telomeres don’t shorten.

“Slowing down ageing in humans would have enormous benefits,” she said. “It’s estimated that there would be a $7 trillion saving in the US alone if you could just slow down ageing – and all its related diseases – by two years alone.”

Teeling’s findings were first published in the journal Science Advances two years ago. It’ll take some time before the findings can be fully validated and the beginning of the development of pharmaceuticals that could translate what long-lived bats can naturally do for humans, she said.

Getting Big Pharma, with its vested interest in selling drugs for age-related illnesses, on board may be another thing.

Teeling is one of a growing number of women participating in the annual Davos talking shop in the past six years, even if they only account for less than a quarter of almost 3,000 attendees this year.

US president Donald Trump’s daughter Ivanka Trump also did her bit, as a team from Washington rolled into town this week.

The White House adviser ranked second only to Trump himself at bilateral meetings with political leaders and a dinner with business executives at Davos – and above four cabinet ministers, including treasury secretary Steven Mnuchin and commerce secretary Wilbur Ross.

She also took part in a press conference on Wednesday on the so-called reskilling revolution, an initiative to provide one billion people globally with better education, skills and jobs by 2030.

“There’s so much we can learn from each other,” said the fashion designer-turned-presidential adviser.

WEF 2020 also saw the return of Britain’s Prince Charles to the conference for the first time in nearly 30 years – speaking to a crowd that finally seems prepared to listen to his lifelong campaign to tackle climate change and declining biodiversity.

The prince outlined no fewer than 10 proposals, including putting sustainability at the heart of business models and identification and promotion of emerging game-changing environment-friendly technologies that cold rein in global warming, to help avert disaster.

Perhaps, at last, he is a man whose time has come.

1 How well paid do you think you are? Here’s how to work it out
2 Life as a Facebook moderator: ‘People are awful. This is what my job has taught me’
3 AIB to sell more than 500 ATMs to Brink’s
4 Wealthy investors’ legal challenge against Revenue fails
5 Flight attendent seeks High Court injunction against Aer Lingus
6 Accumulated profits at Marian Finucane firm exceeded €830,000
7 Dublin down nearly 4% as coronavirus hits markets
8 Former top Department of Finance official David Doyle dies aged 70
9 Teva launches State’s first inhaler recycling programme
10 Coronavirus and the etiquette of working from home
Real news has value SUBSCRIBE