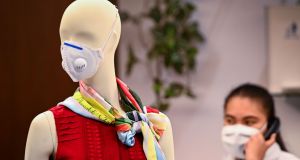 Image of the week: Mannequin mask

In Thailand, where at least 14 cases of the coronavirus have been detected, a Bangkok shopping mall mannequin and a woman talking on the phone are both pictured wearing face masks. Residents of the Thai capital may well be used to wearing such masks as they were previously encouraged to do so as a means to protect themselves against smog.

But the spread of the coronavirus beyond the Chinese city of Wuhan has prompted face mask shortages as people rush to buy masks and sanitiser products in a bid to prevent infection. Some Chinese provinces and cities have made the wearing of masks compulsory, while factories that were meant to be closed for the Chinese Lunar New Year holiday reopened during the holiday to ramp up production.

37% Share of the 5G smartphone market held by China’s Huawei, according to Boston-based analysts Strategy Analytics. This gives Huawei a market-leading share ahead of Samsung, which is on its heels with a 36 per cent share.

0 Number of 5G smartphone shipments in 2018. Apple, which is rumoured to be launching its 5G iPhone later this year, is eventually expected to overtake Huawei and Samsung in the nascent 5G race.

Getting to know: The Michaels

They say customers appreciate the personal touch from companies, but what happens when a company’s personal touch goes haywire thanks to a mailing template technical error and they end up mistakenly calling everybody “Michael”.

That was the fate of insurance company Aviva, which this week apologised after greeting thousands of its British customers as “Michael” in an email, before sending a follow-up in which it clarified “you have recently been sent an email where we mistakenly referred to you as Michael”.

The insurer was then obliged to clarify that there was “no issues” with their customers’ personal data and it was only the email greeting that was incorrect. The error was a temporary one, said Aviva, promising not to take the mick again.

To mark the special occasion of the United Kingdom leaving the European Union, the Conservative Party is touting a special range of “Got Brexit Done” merchandise on its website. So what’s on sale?

1. Tea towel. For £12 (€14.20), a tea towel with a picture of Boris Johnson looking like he’s being impaled from behind by a Union Jack and January 31st expressed in Latin could be the ideal kitchen rag for Leavers across Britain.

2. Mug. At £15, the priciest item in the “Brexit Collection” is, appropriately enough, a mug.

3. Another mug. The Conservative “victory” mug (£15) means Tory fans can celebrate its “monumental achievement” every morning.

4. Lapel pin. For a mere £5, you too can be the owner of an “I Got Brexit Done” lapel pin. Sadly, like the Brexit mug, this one is limited edition.

5. Official magnet. The official “Got Brexit Done” Conservatives magnet (£5) is not to be confused with the unofficial ones that are doing the rounds. Alas, delivery of Brexit items doesn’t begin until February 10th.

1 Berkshire Hathaway profits surge despite $10bn writedown
2 Facebook content moderator lodges High Court action
3 ‘Saudi Arabia is where the opportunities will happen in future’
4 When I’m 65: five ways you’ll benefit
5 Financial ombudsman warns consumers of attempted scam
6 What is the truth about paying tax in Ireland?
7 Sacrificing pubs for schools: Ireland’s latest Covid trade-off
8 Covid-19 has distracted us from the looming threat of Brexit
9 Owning an Irish holiday home is coming into its own. But how much will it cost?
10 Mandarins scramble to replace dodgy figures
Real news has value SUBSCRIBE