Labour Force Survey reveals 531,412 people out of work in Republic in Q2 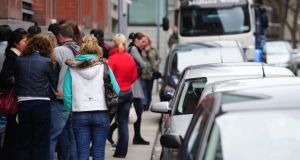 Latest jobless data suggests policy supports must veer towards being “micro” rather than “macro” focused.

The Republic’s unemployment rate rose to 23.1 per cent in the second quarter of 2020, figures from the Central Statistics Office (CSO) show.

The headline figure equates to 531,412 people but includes those on the Government pandemic unemployment payment (PUP).

It is hoped many of these workers will return to work when restrictions to curb the spread of the coronavirus are removed.

The CSO’s latest Labour Force Survey, published on Tuesday morning, gives a snapshot of the Irish labour market at the height of the coronavirus pandemic.

It shows there were 2.22 million employed in the second quarter, corresponding to an employment rate of almost 65.7 per cent for people aged between 15 and 64 years.

There were 118,700 people classified as unemployed, which gave rise to a jobless rate of 5.1 per cent. However, the adjusted measure of unemployment, which includes those in receipt of the PUP, was 23.1 per cent. The headline jobless rate fell to 16.7 per cent in July.

These figures do not include the 370,000 employees on the Government’s temporary wage subsidy scheme (TWSS).

This means that, in total, more than 800,000 people in the second quarter were either unemployed or reliant on the State for wage supports.

The figures show labour force participation dropped to 58.9 per cent over the year, which was the lowest rate of participation since the series began in 1998.

“There is no ready way of telling at this point how large and lasting the impact of the pandemic may be on the Irish jobs market,” KBC Bank economist Austin Hughes said.

“However, the scale of impacts revealed in today’s numbers urges the importance of substantial and sustained policy support to minimise the permanent scarring on the Irish labour market,” he said.

“The details of today’s data also suggest significant variations in impact across the economy that suggests policy supports will need to increasingly become ‘micro’ rather than ‘macro’ focused,” he said

“While the ‘formal’ employment measure shows a large 78,000 drop in employment in Q2 2020 from a year earlier, sectoral details also suggest numbers at work were lower in just seven of the of the 14 main economic sectors,” Mr Hughes said.