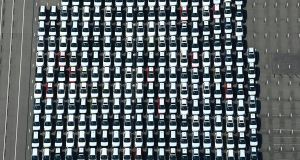 Room for one more? Vehicles are parked before being exported in Kawasaki, near Tokyo. Photograph: Kyodo News via AP 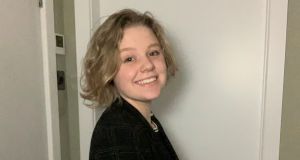 Jess Johnson (18): A-Level student faced losing out on a scholarship when she received the A-level results dictated by the algorithm, but will now get the A she needed in English to fulfil the terms of her initial offer at St Andrew’s University. Photograph: Jess Johnson/PA Wire

Image of the week: Parking only

Japanese exports have tumbled by almost a fifth and this is the picture that seems to sum it up: vehicles at a logistics centre in Kawasaki, near Tokyo, tightly parked together as they wait to be exported. The pandemic has sapped global demand for goods from the third-largest economy, leaving the year-on-year rate of decline in Japanese exports languishing at 19.2 per cent in July. While this wasn’t as deep a plunge as the one Tokyo saw in June, ongoing Covid-19 struggles in the US and other key markets have given little hope for a quick recovery in shipments. In a torrid year for the auto industry worldwide, production has slumped and consumers have been kept away from those forecourts that are open.

Closing level of the S&P 500 on Tuesday, with the blue-chip US index hitting a record high, despite the global economy being in absolute tatters. “This market is nuts,” was how Howard Silverblatt, an analyst for S&P Dow Jones Indices, put it.

The gains on Wall Street have been driven by a small gang of tech companies, led by Amazon. Jeff Bezos’s company has seen its share price rocket about 80 per cent in 2020, with the result that Alexa sounds 80 per cent more smug.

After its share price swelled by about 60 per cent this year, Apple became the world’s first $2 trillion company this week. The iPhone maker only crossed the $1 trillion mark in August 2018.

Getting to know: Jess Johnson

Boris Johnson’s backroom guy Dominic Cummings fancies himself as a “superforecaster”, but he’s got nothing on Manchester student Jess Johnson (18). In 2019, Johnson (no relation to Boris) won an Orwell Youth Prize senior award for A Band Apart, a story about an algorithm that splits students into bands based on their background. Alas, she has since fallen into her own story, having been initially rejected by the University of St Andrews after her English A-level was downgraded by the UK government’s algorithm from an A to a B. “I feel like that is quite ironic. I’ve literally fallen into my own story,” she said as she waited to see if Westminster’s U-turn would restore St Andrews’ offer of a place. “I set my dystopia in the 2040s,” she told Channel 4. “It came a bit quicker than that.”

Maybe it’s the weather, maybe it’s the suspension of normal business, but there’s no shortage of beefs out there. Apparently, we can’t all just get along.

1. Epic Games v Apple. The tech giant has removed Epic’s Fortnite from the app store and said it will cut the company off from its development tools in a row triggered by an Apple-bypassing in-app payment dubbed the “mega drop”.

2. Virgin Media Ireland v Eir. After a single year of friendly mutual distribution, Virgin has withdrawn its sports channels from Eir after the latter cited the “reduced timetable” for its refusal to make a contractual payment.

3. Boots Ireland v landlords. Legal cases are now in train after the chemist chain stopped paying the rent for some shops hit by the Covid-related plunge in footfall. It isn’t the only retailer limbering up for a clash.

4. Washington v TikTok. The White House isn’t light on fights, but its campaign against video app TikTok - owned by a Chinese company (though probably not for much longer) - is destined for the trade-war textbooks.

5. Aryzta shareholders v Aryzta. A group of activist shareholders, led by Swiss group Veraison, have been busy clashing with the Swiss-Irish bakery company over the composition of its board. Time to send for the emergency doughnuts.