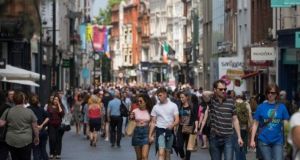 The number of people living in Dublin now stands at 1.42 million, with the local population increasing by 1.6 per cent over the year

Nearly 29,000 Irish nationals returned home to live and work in the year to the end of April, the highest number for 13 years.

Figures published by the Central Statistics Office (CSO) show the overall population rose by 1.1 per cent, or 55,900 people, year-on-year to 4.98 million.

An increase of 1.3 per cent, or 64,500 individuals increase, was recorded in the same period a year earlier.

CSO statician James Hegarty noted that the figures did not record much of the impact of the Covid-19 pandemic as they only covered the first few weeks.

As of April, there were 644,400 non-Irish nationals estimated to be resident in the State, equivalent to 12.9 per cent of the population.

The number of people living in Dublin stood at 1.42 million in April, with the area’s population increasing by 1.6 per cent over the year. Some 28.5 per cent of the State’s total population now lives in the capital.

KBC Bank economist Austin Hughes said the fall in net inward migration was “somewhat surprising” given there was a “sense that these data might see a continuing uptick” in the figure.

He said that in circumstances where increased Brexit-related concerns might have been expected to prompt a pick-up in migration flows from the UK, a significant decline in inflows was difficult to explain “unless we believe that such flows had already largely happened in earlier years”.

“More generally, as the pace of Irish economic growth has picked up notably in recent years, it has prompted sharp increases in employment and corresponding declines in unemployment that seem at odds with a decline in inward migration overall,” he said.

Ger Brady from employers’ group Ibec, said: “Before Covid-19 we had been seeing a flattening of inward migration for a number of years. This is mostly reflective of an economy which had been running close to capacity and had significant quality of life challenges - in areas such as housing, transport, and childcare.”

“These challenges will still exist in the post-Covid world. The new National Economic Plan in October will give the State an opportunity to set out a long-term strategy to improve Ireland’s attractiveness as a place to live, work, and invest,” he said.