Some 57% of employment growth in the past year came from non-Irish nationals, with nearly half of that coming from outside the EU 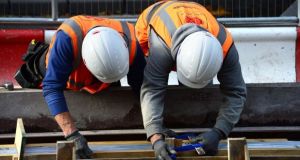 The official unemployment rate of 5.4% is down from a revised 5.6% in February, and 5.9% 12 months ago. It is nearly three percentage points below the euro zone average. Photograph: Getty Images

Unemployment fell to another 10-year low of 5.4 per cent last month, according to official figures.

While the headline rate has been revised up several times in the past two years on the basis of other data sets, the Central Statistics Office (CSO) insists the underlying trend has been downward, in keeping with the growth in employment.

The latest figures show the seasonally adjusted number of people classified as unemployed was 131,100 in March, down 3,400 on the previous month.

The official rate of 5.4 per cent was also down from a revised 5.6 per cent in February, and 5.9 per cent 12 months ago. It is also nearly three percentage points below the euro zone average.

On current trends unemployment is expected to fall below 5 per cent next year, a rate which is equated to full employment here.

Participation rates, particularly for women, however, remain lower than at the peak of the boom or by international standards.

The State’s youth unemployment rate was put at 13.4 per cent in March, down from 13.8 per cent in February, albeit this was more than double the rate in Germany and the Netherlands.

“The trend in unemployment is continuing on its downward trajectory, and is likely to mean that employers are going to find it increasingly challenging to recruit talent,” said Pawel Adrjan, economist at recruitment website Indeed.

“The country is also drawing on inward migration to fulfil open roles, with 57 per cent of employment growth in the past year coming from non-Irish nationals, and nearly half of that coming from outside the EU.”

Mr Adrjan said a review of the top 10 jobs searched for by non-EU nationals on Indeed looking to come to Ireland shows a strong interest in opportunities in the technology sector.

“For EU nationals there was a broader range of roles, perhaps reflecting the lack of visa constraints on migration from EU countries. Nonetheless technology-related jobs still accounted for nine out of the top 20 most searched roles.

“Given Dublin’s position as a hub for many of the world’s largest tech companies it is no surprise that Ireland is attracting a lot of interest from tech talent, which employers will likely welcome given the tightness of the domestic labour market.”