US economic growth revised lower to 2.2% in fourth quarter

Pace of growth slowest since first quarter of 2018 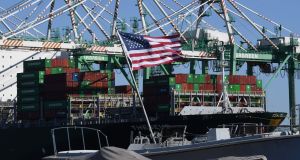 Concerns in financial markets about a global slowdown have fired up a solid rally in sovereign bonds this quarter. Photograph: Reuters

The US economy grew at a slower pace than expected in the final quarter of 2018, adding to the debate about the direction of interest rates this year.

Gross domestic product expanded by 2.2 per cent from a year ago in the final three months of 2018, according to the final revision of the national accounts by the department of commerce.

That was down from the previous estimate of 2.6 per cent, and also below the 2.4 per cent increase pencilled in by economists in a Thomson Reuters survey.

That pace of growth is the slowest since the first quarter of 2018.

Multiple interest rate rises from the Federal Reserve through the year came home to roost in the final three months of 2018. The impact of these had begun to weigh on housing data, and the then likelihood of the US government going into shutdown mode over US president Donald Trump’s attempt to secure funding for his wall on the US-Mexico border may have also weighed on consumer and business sentiment.

The Fed has taken a U-turn on policy in 2019, and last week said it did not expect to raise interest rates this year, citing a weakening global economy. Concerns in financial markets about a global slowdown – as well as the dovish stance from central banks – have fired up a solid rally in sovereign bonds this quarter.

Also out on Thursday was personal consumption expenditure data. The headline price index held steady at 1.5 per cent in the final quarter, while the core reading, which is the Fed’s preferred gauge of inflation, ticked up a tenth of a percentage point to 1.8 per cent.

Markets were relatively steady following the data releases. The dollar index remained about 0.4 per cent higher at 97.144, while S&P 500 futures were down 0.1 per cent. – Copyright The Financial Times Limited 2019