Rockonomics and why Taylor Swift is a genius 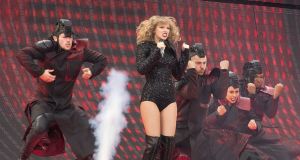 One of the many quirks of economics is the way in which data and theory collide. Not too long ago, few – if any – controversies were ever settled by recourse to the numbers.

If you tortured the data for long enough you could get it to say anything you wanted. Consequently, everything stayed controversial. Inevitably, with few ways of ever settling any debate, the resulting vacuum was filled by a host of tribes, many of whom often clashed, sometimes horribly.

Economics got itself a bad reputation for some of the claims made by the dodgier end of the profession: pure demagoguery expressed by an economist has become unfortunately common in modern political discourse.

The uses and abuses of “Big Data” are starting to change all that. In a small way at least. A methodological revolution is under way that avails of the ever-bigger and better sets of data that are available to us. And some new answers to old questions are quite surprising.

One of the pioneers of this empirical revolution tragically died this week. Alan Krueger of Princeton, once Barack Obama’s chief economist, applied innovative statistical techniques to an astonishingly wide range of questions. One of his most famous studies is now a quarter of a century old, yet has still not received enough public attention. Along with David Card, Krueger showed that increasing minimum wages does not necessarily lead to higher unemployment.

This was an almighty clash between theory and data. Every basic – and not-so-basic – textbook model taught us that jobs would be lost every time we hiked the minimum wage.

Krueger showed us that this theoretical certainty was not always an empirical reality. It took quite a while for this result to become widely accepted. A lot more similar studies with similar results were undertaken. If nothing else, the experience of this clash between theory and evidence should have taught economists a little humility.

Most professional economists do not make exaggerated claims for their discipline. These are the ones who do not make it on to TV screens (or, indeed, newspaper columns). Beware any economist offering certainty.

Krueger’s work on the music industry was also path-breaking. There is, believe it or not, a whole sub-discipline invented by Krueger called “Rockonomics”. A host of issues are teased out with wider applicability: the winner-takes-all phenomenon that is present in so many industries; the disruption caused by the internet; how and why live music became so enriching for a few artists; why Taylor Swift is an economic genius.

The top 1 per cent of musicians now rake in 60 per cent of the available revenues. Inequality is not just driven by investment bankers. But it’s much harder to make money as a musician than as a financier: Krueger is quite emphatic about career choices. Only go into music if it’s your passion. If you want money, go into banking. The median annual income of a US musician is less than $35,000.

Ever wondered where those booking, “ticket-processing” fees go? Or why they are charged at all? Krueger has the answers via the hard data: “The fees often go back to the venue, sometimes go back to the performers.

“The fees are not the actual cost of having to process the tickets. That’s a very small part of the fee. [The booking agency] is sort of a heat shield. It gets the blame. It takes the heat for prices going up, for the fees being so high. But the fees will often go back, or a portion of them, to the venue, if the venue has an exclusive arrangement. Or it could also go to the artist, if the artist and their manager negotiated for that.”

Why, in the US and elsewhere, have concert prices been going up faster than even medical inflation? Krueger has carefully examined all these questions and more, carefully building large, new, data sets along the way.

The relationship between some musicians and fans is explored in surprising (for an economist) ways. The “verified fan” model tries hard to balance demand for under-priced tickets without handing all of the profits to scalpers (touts). Garth Brooks, like Taylor Swift, emerges as an economic superstar with his efforts to keep supply and demand balanced at reasonable ticket prices: Brooks just keeps putting on more concerts (supply), at a fixed price, for as long as people keep buying the tickets (demand).

Krueger also did a lot of work on happiness, unemployment and America’s opiate addiction problem. He work was steeped in humanity. So the fact of his suicide is particularly sad.

It’s that work on the minimum wage that is particularly interesting. The general point about the need to test any theory against the data will always be true. The idea that in certain circumstances a rise in the minimum wage might not damage employment could carry particular contemporary resonance.

Minimum wages are going up in parts of the US, sometimes led by employers rather than regulators. Perhaps the time to experiment with much higher minimum wages is when, like today, economies are running out of workers. Perhaps even in Ireland.