Ireland tops list of countries exposed to fallout from Brexit 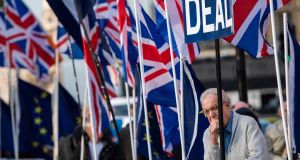 Brexit threat. Ireland’s financial sector’s exposure to the UK is the fourth highest of all 21 economies surveyed, reflecting the size of Irish banking subsidiaries operating in the UK.

Ranked first, Ireland scored a 2.9 in S&P’s index, four times the 0.7 median, “implying significant reverberations in the Irish economy should the UK leave the EU, particularly should it do so without a formal agreement that includes a transition period”.

“Ireland’s 499km Border with the UK encourages vigorous trade in merchandise and services, as well as substantial migratory flows between the two countries,” the S&P report said.

It noted that Ireland exports more goods and services to the UK than any other country on the index, equating to roughly 8.5 per cent of its GDP.

“Deep supply chains extend between Ireland and Northern Ireland, not least in agri and food processing,” it said.

Another byproduct of Ireland’s location is the “large bi-directional immigration” between it and the UK, it said.

“The sum of Irish residents in the UK and vice versa totals 16.7 per cent of Ireland’s population . . . twice that of the next largest bi-directional migratory figure, Malta, and far exceeds two-way migratory flows from southern European countries such as Spain. ”

Ireland’s financial sector’s exposure to the UK is the fourth highest of all 21 economies surveyed, reflecting the size of Irish banking subsidiaries operating in the UK.

“Given all of these connections with the UK, there is little doubt that a no-deal Brexit would represent a sizeable shock to Ireland’s small open economy,” it concluded.

“Nevertheless, we would expect that Ireland’s highly flexible economy would reorient trade toward even larger trading partners, such as the remaining EU countries and the US,” it said.

“We also think that Ireland is well placed to attract some of the FDI displaced from a post-Brexit UK, should UK-based financial subsidiaries and branches lose their coveted EU passporting rights, which currently enable them to sell financial services in the EU market,” it said.