Consortium led by McCourt on track to win broadband tender 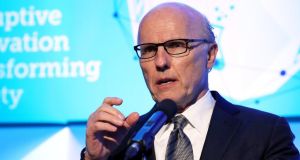 A consortium led by David McCourt is on track to win the tender for the national broadband plan, according to the Sunday Times. Photograph: Jason Clarke

A consortium led by David McCourt is on track to win the tender to deliver high-speed broadband to rural Ireland, the Sunday Times reported, adding that the Government has concluded that there is no viable alternative plan.

Citing senior Government sources, the newspaper suggested the project could cost €3 billion to finish the introduction of at least 30MB broadband speeds to the remaining 540,000 homes and business.

The Sunday Times also reported that boomtime property financier Derek Quinlan is facing a bankruptcy petition from Edgeworth Capital over a dispute linked to debt owed on an office complex outside Madrid.

Quinlan bought the Spanish complex for €1.9 billion in 2008, securing three loans to complete the purchase.

Insurance companies will be forced to reveal how much they’re paying out to settle compensation claims against businesses, the Sunday Business Post reported. After an interview with Minister of State Michael D’Arcy, the paper reports that insurers will be legally obliged to notify businesses of the amount a claim is settled for, and the reason it was settled.

Reporting on a claim by the United Nations, the Sunday Independent said that more than 90 per cent of all loans sold by the National Asset Management Agency were to international funds, the vast majority of which were based in the United States. In a letter suggested to be highly critical of Government policies, it was claimed that unprecedented amounts of global capital have been allowed into the Republic’s housing market.

The Sunday Independent also reported that fresh sale speculation is mounting in relation to Dublin-based Depfa Bank, which is winding down, after it redistributed more than €900 million off its balance sheet back to its German parent bank. The newspaper says that although the bank is being wound down, it could be of interest to companies seeking a European Union banking licence.

The Sunday Telegraph reported that Sports Direct boss Mike Ashley could be nursing losses of more than £500 million on what it calls a “botched high-street shopping spree”.

In an analysis of Ashley’s stakes in a host of rival companies, the newspaper noted that while his losses haven’t been without success, losses dwarf those investments that paid off.