Government wants no border checks, but EU will insist single market is protected 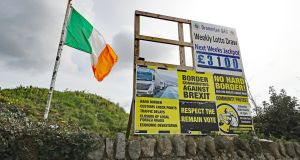 Anti-Brexit signage in the village of Jonesborough, on the border between Dundalk and Newry. Photograph: Niall Carson/PA Wire

All sides have committed to do whatever is possible to avoid a hard Irish Border after Brexit. However, if there is a no-deal exit, a key issue will be what these commitments actually mean.

And here a lot comes down to the definition of what a hard Border is – and isn’t. All we have to go on is the wording agreed between the EU and UK in December 2017, which committed both sides “to the avoidance of a hard border, including any physical infrastructure or related checks and controls”.

Today the European Commission warned that a no-deal Brexit was looking ever more likely. It announced that if this happened it would immediately impose tariffs – special import taxes – on goods entering its territory from the UK and there would to be “checks and controls for customs, sanitary and phytosanitary standards and verifications of compliance with EU norms”. This immediately raises the question of how such checks are to be made on goods entering Ireland from the North across the land border.

It is clear now that this is the subject of intense discussions between Irish and EU officials. In a comment today, a senior EU official said they were working with Ireland to minimise the intrusiveness of any checks, to avoid physical infrastructure at the Border itself and to conduct checks if and where possible away from the actual Border.

But the point is that Dublin has been trying to avoid any checks whatsoever – the whole point of the backstop strategy. Even in the case of a no-deal Brexit, Dublin says talks now underway are on how to avoid a hard Border. The Irish plan would be to push for some arangement which operated in a similar way to the backstop after a no-dael Brexit, but whether this might be possible – or by when – is unclear.

In terms of customs, a fair amount can be achieved via online processes, though some form of physical checks are needed nonetheless, via a way to monitor trucks crossing the border and to check the contents of some trucks. However, the even more complicated bit is ensuring compliance with EU single market rules, particularly in the area of food and animal safety.

It is clear that the EU is insisting that a way must be found to perform these checks – somewhere – and protect the EU single market, particularly in crunch areas like food and product safety.

For Brussels and the big member states, this is non-negotiable as a concept, even if the how and where can be discussed. Were we to refuse, the risk would be of checks being carried out when goods cross from Ireland to the Continental EU markets , freedom of access to which is central to our attraction to foreign direct investment as well as to the exports of many Irish businesses.

The problem for the Irish Government is that a central part of its Brexit strategy has been to ensure that no checks whatsoever were needed at or near the Irish Border. Hence the backstop agreement, the guarantee that there would be no need for a border by having the same customs and regulatory regimes North and South. The backstop guarantees this, even if future trade talks between the EU and UK do not succeed in doing so. But in a no-deal exit, this is all off the table.

Ireland’s stance, so far, is that in the event of a no-deal it needs to hold talks urgently with the UK and EU to avoid a hard Border. But here we come back to the question – what does a hard Border actually mean? Dublin will argue that something like the backstop should remain in place, with the North keeping to the same regulatory regime as the Republic. However this means checks on goods crossing the Irish Sea from the UK into the North – unless the whole of the UK remains in a customs union with the EU and keeps regulations aligned.

In the event of a no-deal, the UK has said that it will allow goods to enter the North from the Republic unchecked and impose no tariffs as part of a “strictly unilateral, temporary approach” to avoid any Irish Border checks. This is not seen as a sustainable long-term position, not least because of the threat it would pose to businesses in the North. However in the short term it will allow London to put the blame for any Border checks on Brussels - and Dublin.

For Dublin, the danger is that any checks will be seen as the acceptance of a return of the border. And even if checks were conducted away from the border itself, any new installations – for example to check the entry of animals and food products – could quickly become a target.

What would happen in the weeks and months after a no-deal Brexit is, of course, open to question. Would the UK come back to the table loking for a deal, probably bringing some type of backstop-type arrangment back into play? Or would there be a long stand-off between the two sides?