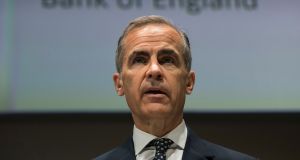 The basic wages of workers in Britain rose at their fastest pace in nearly a decade over the summer months, backing up the Bank of England’s view that a long period of weak pay increases is ending.

Earnings, excluding volatile bonus payments, rose by an annual 3.1 per cent in the three months to August, the Office for National Statistics said on Tuesday. That was the highest since January 2009 and above all forecasts in a Reuters poll of economists.

Sterling increased to its highest level of the day against the US dollar and government bond prices edged down as investors factored the stronger-than-expected wage growth into their projections for when the BoE will next raise interest rates.

Philip Shaw, an economist at Investec, said he expected a rate hike in February, assuming the UK can seal a deal to avoid an economically damaging exit from the European Union in March, followed by another hike later in 2019.

“We may now be exiting a period of relatively low pay growth,” Shaw said on Tuesday. “The implication is that the BoE will be keener to raise rates.” Including bonuses, total earnings rose by 2.7 per cent, slightly above the poll’s median forecast of 2.6 per cent.

The central bank has said it plans to continue raising interest rates gradually over the next three years, despite the economic uncertainty caused by Brexit, in large part because of the inflation pressure that rising pay will create.

Economists have been puzzled why wages were growing so slowly even as unemployment fell sharply. Pay growth for Britain’s workers slowed to as low as 0.5 per cent in 2014.

Despite the recent improvement it remains stuck below the 4 per cent increases that were the norm before the global financial crisis.

The unemployment rate held at its four-decade low of 4 per cent in the three months to August, the ONS said. But the number of people in work fell by 5,000, the first decrease in nearly a year. The Reuters poll of economists had pointed to a rise of 11,000.

The ONS said the fall in employment was driven in part by fewer students seeking work than earlier in the year.

British households - whose spending is the main driver of the country’s economy - have struggled for much of the past decade as their wages grew more slowly than inflation.

Data due on Wednesday is expected to show Britain’s consumer price inflation stood at 2.6 per cent in September, below a peak of 3.1 per cent in November last year but still offering only modest improvement in spending power for workers.

The ONS said in real terms, adjusted for its CPIH measure of inflation, total earnings edged up by an annual 0.4 per cent in the June-August period.

The BoE has said it expects growth in total pay of 2.5 per cent a year by the end of 2018, rising to 3.5 per cent by the end of 2020, enough to justify the central bank’s plan to gradually raise interest rates over the period. – Reuters

1 Will brother’s widow get half of our parents’ estate when they die?
2 Should I switch bank now with Ulster Bank at risk of closing?
3 ‘I have three children and a dog, so I feel like a bit of a human ATM’
4 Banks face ‘hectic’ loan restructuring as payment breaks end, Goodbody warns
5 Save yourself money and heartache by reviewing your house insurance
6 Finance Ireland refinances mortgages with low level of payment breaks
7 EU said to be leaning towards appealing Apple tax decision
8 Belfast mailbox address used by account holder in Russian money-laundering scheme
9 Household wealth grew by €76,000 in years following financial crash
10 Aldi and Lidl at back of queue during UK pandemic
Real news has value SUBSCRIBE