ECB’s Draghi to appear before Oireachtas committee next month 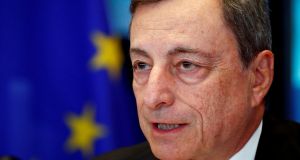 European Central Bank president Mario Draghi is credited with quelling the debt-crisis storm of 2012 and the potential break-up of the euro zone. Photograph: Francois Lenoir/Reuters

European Central Bank (ECB) president Mario Draghi has accepted an invitation to appear before the Oireachtas Committee on Finance, Public Expenditure and Reform to discuss the banking sector.

The tracker mortgage controversy is also expected to be raised with Mr Draghi when he appears before TDs and Senators on November 8th next.

Frankfurt’s most senior official has already appeared before other European parliaments including in Germany, France, Spain, Italy and Finland.

Mr Draghi’s tenure in charge of the ECB comes to an end next year with the race to succeed him already under way.

He is credited with quelling the debt-crisis storm of 2012 and the potential break-up of the euro zone by pledging to do “whatever it takes” to save the euro and launching an unprecedented stimulus programme to bolster peripheral bond markets.

In his letter to Mr McGuinness, Mr Draghi said the EU Treaty specifies that the ECB’s accountability is discharged at EU level, specifically to the European Parliament as the representative body of EU citizens.

“I thus regularly participate in hearings before the European Parliament’s Economic and Monetary Affairs Committee, ” he said.

“Outside of and in addition to established accountability channels, the ECB is, of course, willing to engage in exchanges of views with national parliaments, as these represent important domestic fora where genuine discussions about the ECB’s euro area-wide mandate, outlook and policy reach can take place.”