Chris Johns: The closer Brexit comes, the more you wonder why 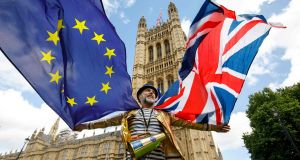 The M26 is, by British standards, a relatively short but important motorway in the southeast of England. As part of the belated preparations for a no-deal Brexit, that highway is now, according to a local MP, being closed at night in order to make the necessary alterations to turn it into a lorry park. That MP is up in arms, protesting about being neither informed nor consulted – and the fact that nobody else was told in advance.

Why is this necessary? Any delays to those lorries at the Channel ports, even short ones, will cause a massive logistical headache: such is the tightness of modern supply chains and just-in-time inventory management that customs checks along the coast will cause traffic tailbacks several miles long. Just how long will depend on how many minutes is spent on checking each lorry.

Those checks will depend on a number of things. To get to grips with this, you have to delve into the arcane details of the regulations involved in international trade between countries that do not have a free-trade agreement. That’s what most people would understand by “no-deal”.

But that’s not quite right: there is, in practical terms, no such thing as “no-deal”. Trade has to be governed by some rules: that’s where unthinking Brexiteers assert that the rules will be those that are laid down by the World Trade Organisation (WTO).

Search for two large, developed countries anywhere in the world that trade exclusively on WTO rules and you will not find any. There are always other rules and regulations that have been negotiated, often painstakingly, over a long period.

Logic dictates there cannot be “no-deal”. Aeroplanes must be allowed to fly, medicines and food must be able to flow unimpeded into Britain.

Another detail not appreciated by the Brexit ultras is that the EU is not a sovereign state: it is a collection of rules and laws. From this flows the relentless logic of “no-deal”: it will be complete chaos. So it can’t be allowed to happen. It simply cannot: no responsible government could possibly preside over this. Or preside over this and survive.

So either the current negotiations produce a deal, or another one (or series of mini deals) will be done in the first quarter of next year. Those mini-deals will be struck because of the threat of that chaos, post March 29th.

The mood music suggests that those mini-deals – for example, to keep planes flying – will not be necessary. The Withdrawal Agreement is all but done, apparently.

If the rumours are true, this means attention will focus on the parliamentary arithmetic. Does Theresa May have the numbers to get the Withdrawal Agreement through the House of Commons? That’s the debate about how many Tory rebels will vote against the agreement, what tactics the DUP will adopt and how many Labour MPs will defy their whip and vote with the government.

The DUP is reported to be thinking about trying to sink the upcoming budget, which could produce a constitutional crisis (for a nation that doesn’t have a written constitution). Political correspondents will think it is a great time to be alive. The odds seem to favour the agreement passing, but you wouldn’t want to bet your life savings on it. The scope for accidents is enormous.

Sterling has risen, a bit, reflecting the slightly improved chatter around Brexit. There have been suggestions of an even bigger rise should a deal be done. If so, I suspect it will be short-lived: the underlying economy is growing slowly and an extension of all the uncertainty into an interminable future – the most likely outcome – will take its toll.

One of the things that won’t happen this year is the Queen’s Speech, an anachronistic way of listing the things the government plans to do over the next parliamentary session. The government isn’t doing anything other than Brexit, so no such speech is required.

While government can’t be bothered to find the time to think about much else beside Brexit, companies have to do so much more. That takes its toll on management time, actual costs and the unmeasurable toll taken by uncertainty.

After all this time, I still struggle to answer the question: why are they doing this?