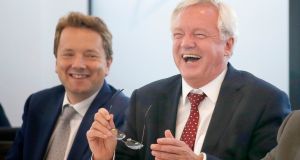 The British government is planning to publish a series of position papers on Brexit, including its plans for the Irish Border, starting next week, in a bid to dispel criticism that it is ill-prepared for the negotiations.

In a statement on Sunday, the UK’s department for exiting the European Union said intense work had been underway to prepare for formal talks on the UK’s future relationship with the EU.

It said it planned to publish three position papers, drawing on more than a year of preparatory work in Whitehall, which would lay the groundwork for the next negotiating round in Brussels at the end of the month.

The papers will cover the UK’s future relationship with the EU customs union, which allows for the easy transfer of goods across the borders of EU member states; Northern Ireland and the Irish Border; and access to official documents following the UK’s withdrawal.

“In a move which shows the UK’s readiness to begin talks on the all-important future partnership, a series of broader future partnership papers will also be published in the run-up to the October European Council, ” the department said.

The UK has been under intense pressure to lift the veil of secrecy that surrounds its Brexit negotiating position amid criticism from European governments, including Dublin, that the its position on several issues still remains unclear.

The UK government said the first paper would outline “detailed proposals” for a new customs arrangement, which will form the basis for further engagement with businesses and stakeholders ahead of future negotiating rounds.

British prime minister Theresa May has so far only indicated she wants to leave the EU customs union in order to secure free trade deals with other countries and to achieve as “frictionless” a trade with the EU as possible.

Leo Varadkar has struck a defiant tone on Brexit since becoming Taoiseach , usggesting his office was not going to design an Irish Border for Brexiteers.

“The approaches outlined in these papers have been carefully formulated following months of work and consultation,” the department said.

“We’ve been crystal clear that issues around our withdrawal and our future partnership are inextricably linked, and the negotiations so far have reinforced that view.”

“These papers show we are ready to broaden out the negotiations. Businesses and citizens in the UK and EU want to see the talks progress, and move towards discussing a deal that works for both sides,” it added.