The economics of Christmas: Why Santa Claus could be on to a loser 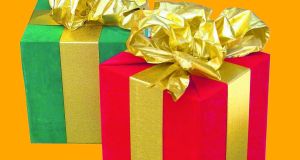 If the metric of commercial value were appropriate to measuring the welfare effects of giving Christmas presents, Santa Claus might be perplexed by the results. Photograph: Ronald Bloom/ISPC

One of the great things about Christmas is that nobody wants to consult an economist over the season. Unlike those who staff the health and caring services, or the emergency services such as the ESB, the world gets on fine for a fortnight on economic autopilot.

However, this hasn’t stopped some researchers from dabbling in the economics of Christmas.

A 1993 study in the American Economic Review was based on asking a small number of economics students to estimate the cost of the Christmas presents they received and compare it what they would have paid for the same items. Rather like Raymond Brigg’s grumpy Father Christmas, who complained about “horrible socks from cousin Violet”, some of these young dismal scientists did not hugely value what they had received, and on average would have valued their presents below what the giver had paid.

The bigger the age gap between the donor and the recipient, the bigger the gap in value or “economic inefficiency” involved.

The paper concluded that everyone would be much better off if people just gave money instead of presents. Perhaps so, but I feel the paper really missed the point about giving and receiving presents.

If the metric of commercial value were appropriate to measuring the welfare effects of giving Christmas presents, Santa Claus would be on to a loser. The element of surprise and the appreciation shown for what may be small items in a Christmas stocking suggests that children (and adults) have a different point of view.

Today, most grandparents in Ireland proudly display art works and crooked home-made pots that their grandchildren have given them as gifts. The fact that these works of art have no commercial value in no way devalues them in the eyes of their new owners. This reflects the fact that there is much more to present-giving than the commercial value of the transactions.

In fact some of the most appreciated gifts will have little or no monetary value.

Present giving has other useful advantages. Children, at a reasonably early age, learn diplomatic skills. Instead of acting like Briggs’s grumpy Father Christmas, they develop the important art of expressing appreciation for what is a well-meant, even if rather poorly targeted gesture – a lesson that has lasting value.

In a recent article in the Economic Journal, Ran Abramitzky and colleagues looked at how the Jewish celebration of the feast of Hanukkah is affected by the celebration of Christmas.

Hanukkah is a minor holiday in Judaism and is little celebrated in Israel, but it is one of the most celebrated Jewish holidays in the US. The feast, which involves the ritual lighting of candles, normally falls in December: this year it falls on December 24th.

In this article, the authors find that Jews in the US with young children are more likely to celebrate Hanukkah, and that Jews who live in predominantly non-Jewish neighbourhoods spend a higher amount on Hanukkah than others.

The authors’ conclusion is that celebration of religious holidays is designed not only for worship and enjoyment, but also to shape a dominant culture’s festive season around their own community’s traditions

In Ireland, it is certainly hard to miss Christmas and those from different cultural backgrounds generally share in the secular festival, even if they do not share in its religious significance.

So too many Irish living abroad may find the Christmas season rather different from what they experienced at home, yet they will endeavour to enjoy the benefits of both worlds.

With so many Irish families having members living abroad Christmas takes on a special significance as a time when families, where possible, gather together from afar. In the many cases where this is not possible, the dramatic change in communications over the last 30 years means that for many families an Irish Christmas will be shared by phone or Skype across the globe, beginning with dawn in New Zealand and ending with night in Honolulu.

For these families the talk will be much more important than the commercial value of any presents.

1 Opioid executive admits to ‘no morals’ ahead of prison term
2 Are there annual limits on inheritances or gifts to a child?
3 Who are Ireland’s 17 billionaires?
4 Ryanair wants Irish courts to block Skyscanner from selling its flights
5 EU banking watchdog describes rejection of Cross nomination as ‘unfortunate’
6 Is Ireland’s booming economy just an illusion?
7 Microsoft sued by 'frozen out' ex-worker
8 Financial payments group Planet in rumoured €1.98bn sale
9 ‘If you don’t like challenges, you should not be in the airline business’
10 Ten of the most mysterious aircraft disappearances
Real news has value SUBSCRIBE