If history repeats itself Trump will be a high-spending, big-borrowing president 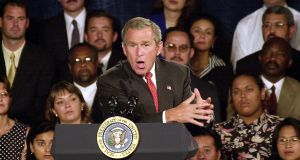 There is a myth that the US Republican Party is populated with fiscally conservative but responsible politicians – a myth largely perpetuated by the Republican Party itself. In fact, over the past 35 years Republican administrations have repeatedly borrowed in a profligate manner plunging the US into increasing debt.

In each case it has been a Democrat regime that has managed to restore order to the public finances. It looks today as if this cycle is about to be repeated by the incoming Trump administration.

In the last year of president Jimmy Carter’s term in 1979, the US deficit was under 4 per cent of GDP. However over the early years of Ronald Reagan’s regime in the 1980s, the deficit was allowed to grow, peaking at more than 6 per cent of GDP in 1983.

The reason for the sustained rise in the deficit was the tax cuts they introduced. The Reagan administration argued that tax cuts were self-financing, whereas, as most economists told them, self-financing tax cuts are a delusion.

While, during the latter Reagan years, there was some reduction in the deficit, the first president Bush relaxed the fiscal reins again in 1989, leaving the incoming Clinton regime in 1993 with a deficit of almost 6 per cent of GDP. The result of the continued period of fiscal profligacy under a Republican regime was that the US debt/GDP ratio rose from 40 per cent in 1980 to 70 per cent in 1993.

A key task of the incoming Clinton administration in 1993 was to bring the public finances back under control. Bill Clinton achieved this, producing a small surplus by his last year in office. This fiscal responsibility was also accompanied by a period of continued economic growth, which eased the burden of adjustment. As a result, the debt ratio was reduced by almost 20 percentage points over the Clinton years.

The return of a Republican regime under the second President Bush in 2001 saw a return to fiscal expansion. Even more seriously, the failure to regulate the financial sector culminated in a collapse in the economy in 2008. The result was that, by his last year in office, Bush presided over a then record current deficit of over 7 per cent of GDP.

The latter years of the second Bush regime had seen repeated warnings by prominent economists that the fiscal profligacy, and the related deficit in the balance of payments due to ballooning imports, would end in tears. The nature of the eventual economic collapse was, however, not foreseen.

The depth of the recession resulting from the exceptionally unwise policies of the Bush years saw the deficit rise further under Barack Obama’s first term to peak at more than 12 per cent of GDP in 2009.

The fact that redressing the massive economic problems would take a number of years did not prevent much of the odium for the resulting pain and suffering being placed on Obama’s shoulders. However, over the course of the second Obama term, fiscal order has been largely restored with the deficit falling towards 4 per cent of GDP and the economy returning to steady growth.

Now the cycle looks set to turn under the incoming Trump administration. In so far as one can judge, something that is difficult with Trump, the new regime will make major tax cuts, as did Reagan, but it will also substantially increase infrastructural investment. If such policies are implemented, that will quickly see the deficit rise and the resulting expansion in the economy will bring a rapid increase in US imports.

In the short-term, this will add to growth in the US, and there may even be an expansion of world trade selling to the US, unless and until Trump moves to raise trade barriers. The rise in the dollar, making the US less competitive, will add positively to growth in the rest of the world.

However, this time around the US economy is beginning from a weaker position than in the Reagan era. The result will be that, unless the administration reverses engines mid-course, dangerous pressures will build up in the US economy. The consequence is likely to be that the president elected in 2020 will, once again, have to take painful action to restore order to the US economy.

This pattern of boom and bust cycles is familiar to us in Ireland. Most economies benefit from a more consistent approach to fiscal policy, such as has been recommended by Ireland’s Fiscal Advisory Council. However, electorates appear to prefer the excitement of periodic booms, although fiscal irresponsibility inevitably sows the seeds for the next bust.

1 Bank leaked my loan request to family who tried to rip me off
2 Coronavirus: Irish holding back on holiday plans
3 Solar panels: Are they worth the investment?
4 Can I see my father’s previous wills?
5 Eason acquires rival Dubray Books for undisclosed sum
6 Appeals board refuses planning for 146 Clonmel homes in ‘fast track’ case
7 Ryanair and Aer Lingus monitor impact of coronavirus on travel to Italy
8 New Irish commercial property website goes live
9 Fuel company loses €1.35m challenge over tax bill in ‘green diesel’ case
10 What is at stake for Ireland in the new Brexit talks?
Real news has value SUBSCRIBE