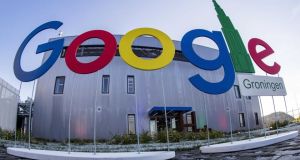 A new Google data centre in Eemshaven. The Netherlands was only one stop in a whirlwind movement of billions in company profits. Photograph: EPA/Vincent Jannink

Does there ever come a point when big multinationals feel obliged to pay more tax? Or will the need to maximise shareholder return always trump (excuse the pun) all other considerations?

The week was dominated by the final European Commission judgment of the Apple tax affair. Who knows what the European courts will decide in the years ahead on the legalities of this. But the fact remains that Apple had a structure that allowed it to pay tiny amounts of tax on profits earned outside the US.

Now we hear that Google continued its own tax avoidance play in 2015, moving some €12 billion in funds out of Ireland, to the Netherlands, back to Ireland and then on to Bermuda. As a result, Google’s tax rate of profits earned outside the US was just 6.4 per cent.

The fundamental reason for this remains the fact that US tax legislation allows US companies to avoid US corporation tax on their profits – subject to certain restrictions – provided the money remains outside the US.

Google achieved this through a mechanism knows as the “double Irish/Dutch sandwich.” This involved Google’s Irish arm, which collects the bulk of its advertising revenue earned outside the US, and another Google company in Singapore transferring money to a Dutch Google company.

The Dutch company then sends it to an Irish-registered Google subsidiary, which is tax resident in Bermuda. This subsidiary owns the right to use Google’s intellectual property outsider the US – and so is effectively charging the other companies for the use of this.

The continued use by Google of the Dutch company in the middle of this is unusual. The tax advantage of the mechanism was removed in 2010 by a change in Irish withholding tax practices. We can only presume that Google is still doing it this way because that is always the way it has done it.

And, of course, the double Irish structure itself was abolished in 2014, although companies already using it, such as Google, can continue to do so until 2020.

Given the international fuss about all this, the pity is that the Government did not decide to end this all more quickly. Surely a two- or three-year phase-out would have been sufficient?