We need to plan for range of post-Brexit possibilities, from unfavourable to positive 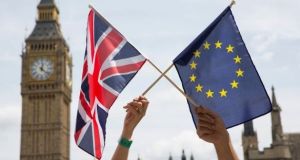 It’s possible that the negative effects from Brexit could be offset by significant redirection of FDI to Ireland. Photograph: EPA

In recent years, the information contained in the standard economic statistics for Ireland has become increasingly opaque, due to the effects of globalisation.

This problem made headlines with the publication of the figures for 2015, showing an incredible growth rate of 20 to 25 per cent.

The problems continue with the more recent data for this year: for the first nine months of 2016, real GNP, as reported in the national accounts, was around 9 per cent higher than in the same period last year – another unrealistic figure.

Thus, divining what is really going on remains difficult.

The more reliable and easily interpretable labour market data show average annual growth in employment in the first nine months of this year of around 3 per cent.

This compares with average growth in employment since the recovery began of around 2.5 per cent a year – if anything, a pick-up in growth.

The CSO data on sectoral output also suggest rapid growth to date in 2016, with output in the large “other services” sector being almost 7 per cent above last year.

As this sector excludes much of the activity of multinationals, it is a useful guide to what is happening in domestic firms.

When the range of available evidence is considered, it suggests the economy this year will have grown by between 4 and 6 per cent, compared to 2015, and that there is little sign, as yet, of a significant slowdown.

In preparing economic forecasts it is important to remember that, even with the best research, the future will always be a surprise.

This does not make forecasts irrelevant. Instead, the way we should approach the uncertainty about the future is by teasing out a range of possible scenarios.

When an iceberg is spotted early, evasive action can save a ship.

Similarly, in considering the future of the economy, scenarios which look disastrous may trigger appropriate policy responses, which can move the economy to calmer waters.

The “failure” of such scenarios to actually happen may be considered a successful outcome of a forecasting process.

However, particularly during the crisis years, there was a reluctance to consider more favourable scenarios.

As a result, over the period 2012-14, there was a very slow awakening among policymakers that renewed investment in housing was a priority.

In its most recent medium-term economic forecast, the Economic and Social Research Institute (ESRI) considered a scenario where policy on housing actually succeeds, and we build 25,000 or 30,000 dwellings a year from 2018 onwards.

This research indicated that the banking system, as it stands, may not be able to finance all of this investment.

This would suggest that policymakers need to prepare for such a situation and that commercial investment in the rental sector might need to play a greater role in the future than in the past.

Over the last 30 years, the ESRI, in publishing medium-term scenarios for the economy, has treated the uncertainty inherent in such an exercise in different ways.

However, whatever the approach taken, it was difficult to communicate to a wider audience that there is no single set of numbers that is a “preferred” forecast.

When three scenarios were published, immediately readers tended to take the middle scenario as the most likely outcome.

When faced with only two scenarios, many readers were particularly uncomfortable – wanting guidance as to which of the two was “correct”.

The answer in each case is that we cannot know which “forecast” is correct. Instead policymakers need to plan for a range of possible eventualities.

We have learned, to our cost, that very unfavourable but possible outcomes, even if considered unlikely, need to be taken seriously.

Last week, the ESRI published a number of medium-term scenarios for the Irish economy.

The range of possibilities considered suggested that, in the absence of unpleasant surprises, the economy will perform somewhat better than the EU average over the next 10 years. However, a range of possible risks was also identified.

Until agreement is reached on what Brexit will actually mean, the repercussions for the Irish economy in the “limbo” period will probably be very limited.

However, once Brexit happens, the extensive Brexit-related research for the Irish economy suggests that it will, on balance, have negative consequences.

But, there remains the possibility that these negative effects could be offset, at least in part, by significant redirection of foreign investment to Ireland as a result of Brexit.

The conclusion I would draw is that we need to plan for a range of economic possibilities arising from Brexit: from the very unfavourable to the mildly positive.