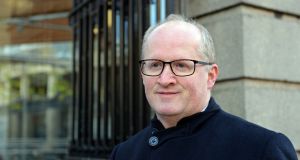 Central Bank governor Philip Lane: Looking into the creation of a security based on sovereign debt from multiple EU countries. Photograph: Eric Luke

The European Systemic Risk Board is set to survey market participants about the creation of a pan-European bond backed by countries’ sovereign debt, it said on Thursday.

The survey will be launched by the end of December and run until January 27th, said the ESRB, a financial risk watchdog which brings together the European Union’s central banks.

An ESRB taskforce, chaired by Central Bank governor Philip Lane, been looking into the creation of a security based on sovereign debt from multiple EU countries, which would address banks’ and investment funds’ need for high-quality collateral to use for borrowing cash.

It is seen as an alternative to a long-debated common euro zone bond which has been resisted by the bloc’s economic powerhouse Germany.