Mortgage approvals up by more than 30% in last three months

Value of approvals also jumps, up 43.2% with 3,377 mortgages sanctioned on average 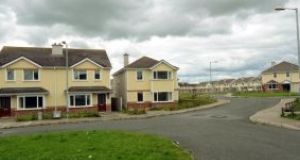 First-time buyers and mover purchase volumes grew year-on-year by 28.6 per cent and 32.4 per cent respectively

Almost 3,400 mortgages were approved in the three months to the end of November, up 30.8 per cent versus the same period a year earlier.

New figures from Banking and Payments Federation Ireland also show the value of mortgages approved jumped by 43.2 per cent. In November alone, mortgage value approvals were up by 61 per cent.

The fastest growing component was first-time buyers, which rose by 70 per cent year-on-year in November.

Goodbody economist Dermot O’Leary said it is unlikely the Government’s help-to-buy scheme, which was announced in the budget in October, had much impact on the figures as there they wasn’t sufficient clarity around the programme until relatively recently. However, he added there may have been an element of pent-up demand being reflected in the November approvals, as potential homeowners were waiting on clarity around budget-day measures before proceeding with purchases.

Overall, a total of 3,377 mortgages was approved on average in the three months under review with a collective value of €680 million.

First-time buyers and mover purchase volumes grew year-on-year by 28.6 per cent and 32.4 per cent respectively.

Mover purchase mortgage values grew faster than first-time buyer values and were at their second highest level since January 2011, rising by 45.1 per cent.

The number of mortgages approved overall rose 2 per cent on a monthly basis while the value was up 4 per cent.

Approval volumes rose by 11.5 per cent in the year-to-date while the value of approvals grew faster still, jumping by 18.3 per cent.

Goodbody is forecasting growth of 19 per cent in mortgage drawdowns in 2017. However, Mr O’Leary said recent approval trends suggest that this forecast might prove to be conservative.

“This data is consistent with our expectation for a total lending drawdown volumes of over €5.5 billion in 2016, which would equate to a 14 per cent increase year-on-year. The increase in approvals growth into year-end also fits with our expectation of very strong mortgage lending growth in 2017, given the recent signs of a re-acceleration of house market prices and the related Government and Central Bank of Ireland measures, which should both support first time buyers in accessing mortgage financing,” he said.